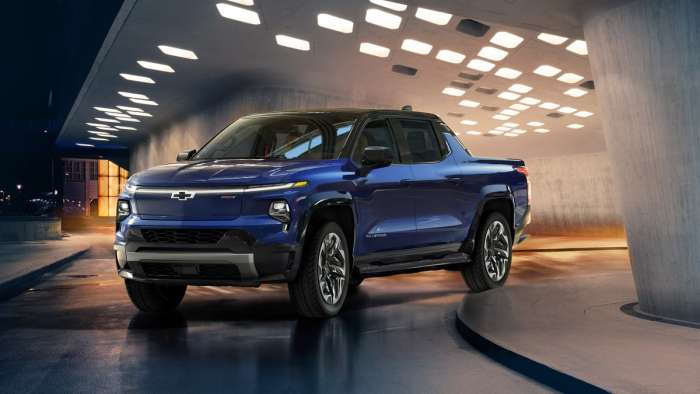 Chevrolet released more information this week about its planned 2024 Chevrolet Silverado EV. CEO Mary Barra confirms that the company has now received 140,000 reservations for the EV pickup that is due to start production at some point next year. Ford started producing its F-150 Lightning pickup this week at its Rouge Center in Dearborn, Michigan.

GM released its Earnings report this week, highlighting the fact that it is accelerating its EV production as consumers appear to warm to the idea of electric vehicles.

Chevrolet is promising that its all-electric Silverado will have a range of 400 miles, 4-wheel steering and ten outlets in the truck bed with 10.2 kw of power.

Chevrolet also released this video showing the Ultium platform underpinnings to the truck:

There will be two versions of the Silverado EV Pickup early on. The first trucks will be WT trucks sold to fleet buyers. They will go into production early next year and sell for $39,000. The work truck will offer 510 hp and 615 lb-ft of torque. The work truck will offer 8,000 pounds of towing and 1,200 pounds of payload. The second round of trucks will be the higher end RST versions that will sell for approximately $105,000. The RST trucks will be loaded with bells and whistles. Production should start in the second half of 2023. An off-road Trail Boss model will follow eventually. Both the WT and the RST versions are expected to have the 400-mile range.

Similar to the all-new GMC HUMMER EV Supertruck, the Silverado EV will have a special boost option. In the Silverado EV it will be called the Wide Open Watts mode. In the WOW mode, the RST will have 664 horsepower and more than 780 lb-ft of torque. It will have an estimated 0-60 mph time of 4.5 seconds. The EV will have standard DC fast charging, adding up to 100 miles of charge in ten minutes. It will be built at GM’s new FactoryZERO in Detroit.

The RST version will be capable of carrying 1,300 lb. of payload and towing up to 10,000 pounds. It will feature the multi-flex tailgate and also have a special feature called the multi-flex midgate. The midgate allows the driver to fold down the back seat to extend the truck bed, as shown in the video.

At this point Chevrolet has not changed the production schedule for the Silverado EVs but I wouldn't be surprised if they try to move up production to compete with Ford's timing.