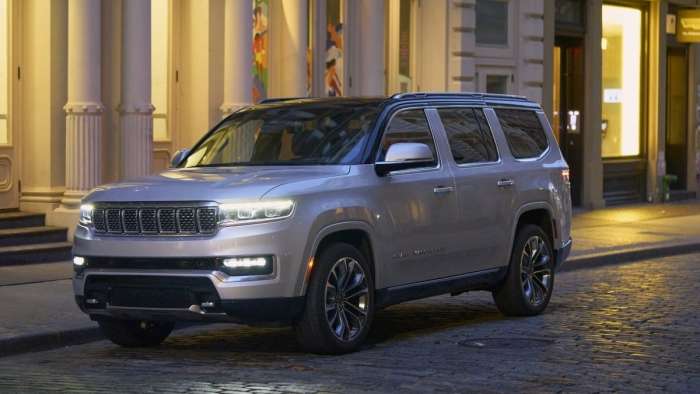 Usually you do not hear the words luxury and Jeep in the same sentence but the 2022 Jeep Grand Wagoneer is changing that!
Advertisement

The totally redesigned 2022 Jeep Grand Wagoneer is creating buzz for a new type of award it just landed. CarBuzz has just given the Grand Wagoneer the 2021 Family Luxury Award. Jeep redesigned the family hauler to compete with the ‘Best of the Best’ in the premium SUV class and it is clear that the new SUV is more than holding its own.

The Jeep Grand Wagoneer was brought back to life as an eight-passenger, three-row SUV. Designed to be ultra-luxurious, it has best-in-class overall passenger volume, total volume, best-in-class third-row headroom, and second- and third-row legroom. It also offers the most cargo room behind the third row. It competes with the Lincoln Navigator, Ford Expedition, Chevrolet Suburban and Cadillac Escalade. That is a tough line-up to compete with, but it is making inroads into the premium large SUV segment.

"The amount of luxury in the Grand Wagoneer is nothing short of staggering," said CarBuzz Managing Editor Jake Lingeman. "With 75 inches of reconfigurable screen, the latest Uconnect software (five times faster than the previous version), and built-in Amazon Fire TV, there’s no length of road trip that would be too long. Keeping things settled and cushy over the long haul is a fully independent suspension setup with rear load-leveling for when carrying lots of payload. The Grand Wagoneer comes standard with an electronically controlled air suspension that continually adjusts stiffness for the best on- or off-road ride.”

“The CarBuzz Family Luxury Award is a testament to Grand Wagoneer’s world-class craftsmanship and the fact that there is a premium space for every member of the family,” said Jim Morrison, vice president and head of Jeep brand North America. “The refinement, best-in-class passenger volume and advanced technology, including the new Uconnect 5 system, front passenger interactive display, premium McIntosh audio system and industry-first built-in Fire TV, ensure that every seat in the Grand Wagoneer is the best seat in the house.”

"The 2022 Jeep Grand Wagoneer is such an impressive luxury SUV, we wonder why Jeep didn't introduce it sooner," comments Jared Rosenholtz, CarBuzz Editor at Large. "Though it doesn't wear any Jeep badges on the exterior, the Grand Wagoneer encompasses what American luxury is all about: space for days, real wood trim, supple leather, and enough screens to embarrass a football stadium. Even more impressive, the Grand Wagoneer cocoons its occupants while towing nearly 10,000 pounds behind it, meaning it can carry your family and your boat."

This is the third year that CarBuzz has given awards. This year, it gave out 11 awards in categories like: Affordable Fun and Electrified Luxury. Read more about the CarBuzz awards here.