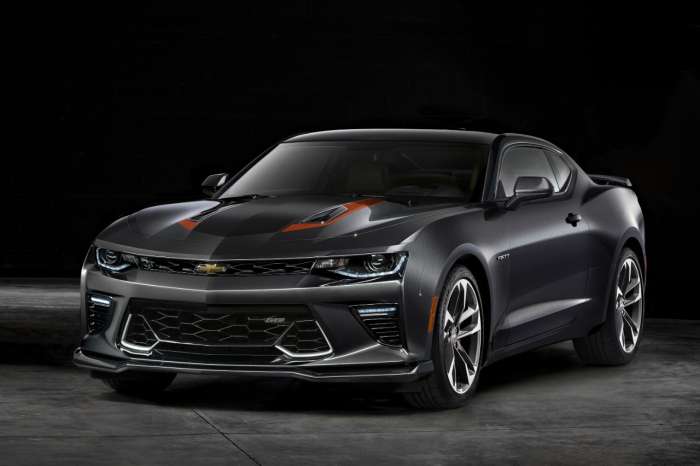 You buy a new car and especially a commemorative edition and you find out that something isn't assembled correctly. Owners of the 2017 Chevrolet Camaro 50th Anniversary Special Edition are upset that the headliners in their new vehicles are already separating.
Advertisement

Cyber posted in a popular Chevrolet Camaro forum to find out if the quality problem with his brand new 2017 Chevrolet Camaro 50th Anniversary Special Edition is a common complaint. “I just purchased a 2017 50th Anv SS after selling my 2012 Camaro. 2nd day I had it out, looked over and noticed the headliner coming out. It's cut too short and won't tuck back under the trim. Is this a large spread known issue? I posted on the 50th Anv Facebook page and several others have the same issue. Do they have to replace the whole headliner to fix? Concerned it will cause more issues local dealer replacing the complete headliner.”

Owners are concerned that the repairs will cause more problems

RC, from Houston, has the same issue. “Bought mine 5 weeks ago, and looks EXACTLY like that. Dealer has ordered a new one. One member said his dealer removed the front windshield to replace it... That scares me! My dealer said remove passenger seat only. They seem like a reputable shop, and I've explained my concerns about rattles/squeeks/etc. We'll see pretty soon - new headline is supposed to be in this week.”

Cyber is worried as well. “Remove the windshield to replace headliner?! Ouch!”

Chevy tends to agree. “I am getting it by the rear window. Whole thing is hanging down. Not sure if I want to get it fixed if they have to remove the front windshield, etc to replace it. Especially if this is an issue that hasn't been fixed yet despite being an issue for over a year now.”

Another Camaro owner believes removing the windshield is excessive. “Must be one of those dealers that likes to bill GM with unnecessary repair procedures to pad their warranty work. They probably make good money of that tactic from GM.”

A Canadian Camaro owner says most of the complaints are for poor fitting trim around the windshield. “The majority of problems are at the front windshield. You're the first one I have seen that it is coming out over the door. That would drive me nuts. It is easy to forget the little bit of trim showing by the windshield but the door you would see every day.”

Dusty, from Florida, has had it repaired. “The only way to get the headliner in without bending it is through the windshield You may have been referencing me when I stated they removed my windshield. My dealer tried everything trunk with seats removed passenger side with seat out they resulted in calling GM for advise on how to replace the headliner and GM said front windshield has to come out. It is the only way without bending the headliner since it’s a single piece. If they bend it and crease it you will get sag somewhere. They had a professional windshield company come in and do it no diff then if you crack your window and need it replaced.”

Other owners complain about the seat covers in the Camaros

PJZ from Phoenix says another common complaint is about the Camaros’ seats. “Mine has been like that pretty much since purchase. In the front, back and passenger side door. My dealer said bring it in prior to the warranty expiring and they will replace it. Same with the seat covers pulling out from various points. His point was to wait a bit for all of these old incorrectly cut parts to be shipped out before ordering a new one as you might end up with the same exact problem. And as far as I know, yes, they need to take out the windshield to fit or else they have to bend it trying to get through the door.”

Adam, from Florida, isn’t happy with what his dealer told him. “Mine is like that on the passenger side. I brought it up to my dealer and they said it's a known issue with no fix. They took me around to look at every Camaro they had on the lot and 5 out of 6 were the same way. I called GM to find out when they'll have a fix for it and they were clueless. Is anyone else who has/had this issue having luck with replacements? Adam elaborated on his call to GM. “I'd say the proper action would be to call GM directly and create a "service request" in their system. The more people who call and report this issue, the more inclined they will be to release a fixed headliner that's not cut too short. Bonus - They gave me a voucher that can be used toward accessories for my trouble. More info - The number I called was the main Chevrolet Customer Care number: 1 (800) 222-1020. The representative who initially answered the call was obviously foreign and difficult to understand, so I escalated the call and then received some help. I was assured that the issue was being sent on to another department for review and that accepting the voucher was not in any way surrendering or voiding the warranty for the headliner.”

Macky, from Louisiana, says the repairs don’t solve the problem. “My headliner detached in the front on both the driver and passenger side. I had it replaced at the dealership and it detached again three weeks later. I brought it in again and it took them 4 weeks to put in another new headliner. I just picked it up yesterday and the passenger side has already fallen again. The dealership is going to put in a "Customer Concern" report, but I am not sure what good that will do. Needless to say, I am extremely disappointed.”

RC says he just checked and the dealer has gotten him a headliner that is larger so hopefully it will solve the issue, once and for all. “Stopped at my dealer this afternoon to measure the headliner they ordered for me. It measures about 3/8" wider and driver/passenger sides are equal (measured from visor hole - passenger side on current one was short by 3/8" exactly) - so think I'm good to have them move forward. Service shop manager said the same - windshield out to replace, then reinstall.”
I understand that every company is trying to cut waste, but by cutting the original fabric too short, GM is costing itself thousands of dollars in repairs. It is sad to see, especially on a Special Edition Vehicle!

Greg A. wrote on September 17, 2017 - 12:55pm Permalink
I bought my wife a 50th anniversary edition and the windshield appears to be de-laminating. The dealer won't help so I'm reaching out to see if anyone else has had this problem. The vehicle is garage kept and isn't even ready for the first oil change.
Greg wrote on September 22, 2017 - 6:15pm Permalink
The windshield fogs up on our 2017 50th anniversary edition. Any fix???
Kim wrote on July 17, 2019 - 9:21am Permalink
I have the same problem with my 2017 50th anniversary edition. I took it into our local dealer and was told it was "normal" and I just needed to learn to adjust the air conditioner temp. WELL now it is 2019 and this is NOT "normal". Driving to work in the morning (I live in Southeast Texas where it is very hot and very humid) I have to leave my wipers on all the way into work. This is VERY irritating. I have owned many cars over the years (4 camaros) and NOT ONE HAS DONE THIS.
carguy12 wrote on December 2, 2017 - 5:19am Permalink
If GM can't build a decent corvette as far as quality control, how would a camaro be different? GM is all about max profit made on gullible consumers.
Judy wrote on July 21, 2018 - 2:25pm Permalink
I just had a 2018 SS custom order, and apparantly they haven't fixed the issue with the headliners. I had it 2 days and noticed in the rearview mirror that a part in the center was a little lower than the rest. Having a 2013 before, I thought maybe it was part of the new design. When I checked it out, the entire headliner is too short and I can pretty much fit my whole hand into it. Then I checked out the front and same thing, it's about half an inch too short. I waited way too long for this car to arrive, and now I have to take it in for work already. I'll probably have it done in the winter when I won't be driving it. Very disappointed that I have to have such a major repair, and I'm fearful it will just cause more problems in the long run.
Randy Mulroy wrote on December 30, 2018 - 8:27pm Permalink
Our 2017 RS Camaro has transmission problems. Now they want to change the fluid for second time and a third if needed before changing the torque conviter. The granny is rough in the 8th gear.Make it rough you enjoy our vacation of 1800 miles
Michael Sabine wrote on March 11, 2019 - 12:55pm Permalink
My too. Shudder when driving 60 to 80 mph on v6 mode also it shudder when it come to fuel management on v4. They flush 3 time and telling me that it will go away after 200 miles. It hast solved the issue. Been doing alot of research on the A8 transmission that lot of Camaro owner are fs ing the same issue that it need to replace new Torque converters. Which Chevy dont like to pay for it. Also I believe Chevy knew about the tranny. I believe they been using the wrong transmission fluid at the production line. So I guess they been hiding all along. Flushing 3 times is like trying to remove metal particles which probably already been damaged. They had to put special fluid in the tranny.
Allee wrote on June 29, 2020 - 4:39pm Permalink
I have a 2017 camaro rs and I think my transmission is messed up too. It shudders when I’m driving it & it only has 36,000 miles on it. It started doing this about 3 months ago
Ricardo wrote on March 20, 2019 - 1:44am Permalink
Car developed cyclical intermittent vibration, noticeable above 25mph, most prominent > 55mph. Research indicated a known problem with previous year Camero's and Corvettes related to the toque converter. They flushed and replaced the transmission fluid three times. This took care of the problem. When inquired about viscosity of fluid, they needed a lighter viscosity. Problem resolved. If not, they would replace the torque converter. So far, so good; it hasn't returned.
Jeremiah Crouse wrote on June 11, 2019 - 8:21pm Permalink
I have had the same issue. Rumbling noise, getting stuck in gear. They flushed it twice with different fluids and supposedly fixed it. Then all my break lights come on and lock up my car and couldnt move. I had to have it towed. Only has 24k on it and I am worried my transmission is going to go out!
Sandy wrote on February 28, 2019 - 6:08pm Permalink
Just got my 2017 camaro back from the dealership, 2nd time replacing the headliner. Had the headliner replaced at the end of April 2018 the first time. Due to problems they had my car for over a month. I took my car in on 2/20/19 to replace the headliner the 2nd time, they had my car 1 week. After I got home I was checking the headliner where the problem was this time where the windshield and headliner come together there was a gap of approximately 1/4" where the fabric ended not going all the way to the windshield, kind of felt like Styrofoam. There is still a gap (no fabric), it is very hard to see, have to touch it to know what the problem is.