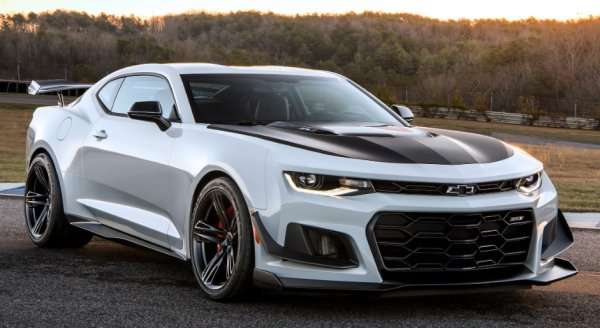 General Motors has announced the pricing for the 2018 Chevrolet Camaro ZL1 1LE Extreme package and in adding just $7,500 to the bottom line, this track-ready muscle car starts at $69,995 – so it outperforms the 5th generation Camaro Z28 and costs less.
Advertisement

The 2018 Chevrolet Camaro ZL1 1LE is billed by GM as “the ultimate Camaro track-day model” and in taking that role, the ZL1 1LE seems to be the evolutionary replacement for the 5th generation Camaro Z28. The supercharged 6th gen ZL1 1LE offers far more power than the 5th gen Camaro Z28 and with the “normal” 6g ZL1 turning a quicker lap time at the Nürburgring than the 5g Z28 - we know that the new Camaro with the ZL1 1LE package will be considerably quicker on any road course.

In short, the new Camaro ZL1 1LE should outperform the previous Camaro Z28 in pretty much every situation, but with today’s pricing news from General Motors, we learn that the new, better-performing muscle car costs less than the old track terror.

“In the long, storied history of Camaro performance, there’s never been another model that matches the capability of the ZL1 1LE,” said Steve Majoros, Chevrolet cars and crossovers marketing director. “With the addition of the new 650-horsepower ZL1 1LE, the Camaro lineup is more diverse and exciting than ever, offering customers the ability to select and personalize their ultimate performance car.”

The 2018 Camaro ZL1 1LE
The 2018 Chevrolet Camaro ZL1 1LE Extreme Track Package is obviously based on the 6th gen Camaro ZL1, with the supercharged LT4 delivering 650 horsepower and 650lb-ft of torque while that power is sent to the rear wheels via a 6-speed manual transmission. That drivetrain makes the new ZL1 the most powerful production road-going Camaro ever while the Magnetic suspension package and Brembo brakes help make the new ZL1 the quickest Camaro to ever lap the German Nurburgring.
However, the 1LE Extreme Track Package is meant to take the ZL1 to the next level, and it does it by adding unique aero bits, a unique suspension setup, a lower curb weight and a unique wheel/tire setup.

To be more specific, the 2018 Camaro ZL1 1LE package starts on the outside, with a carbon fiber rear wing, a more aggressive front splitter and dive planes on the front corners – all of which help to greatly increase high speed downforce. Next, the 1LE package adds adjustable Multimatic DSSV® (Dynamic Suspension Spool Valve) dampers, which were also used on the 5th gen Camaro Z28. Finally, in addition to the sticky tires on lightweight wheels, the 1LE ZL1 has a lighter rear window and a lighter fixed rear seat.

We haven’t gotten any track times for the 2018 Camaro ZL1 1LE yet, but we know that the “normal” 6th gen ZL1 turned in a lap time of 7:29.6, making it the fastest American muscle to ever lap the famed German road course. For comparison, the 5th gen Camaro Z28 ran a 7:37.4 and the 5th gen ZL1 ran a 7:41.27 – each of which was the quickest muscle car when they ran those numbers. The old ZL1 beat the old Z28 and the new ZL1 beats them all. Adding the higher performance suspension, the wider wheels and tires and the extreme aero bits should most certainly allow the 1LE-equipped 6th gen ZL1 to turn the quickest time ever for a muscle car at most road courses – not just the Nürburgring.

Most importantly, all of the additions of the 2018 Camaro ZL1 1LE package carry a combined MSRP of just $7,500. When combined with the MSRP of the standard ZL1 and the various destination charges, the most track capable Camaro ever has a starting price of $69,995.

Based on this, you have to wonder why anyone buying a new Camaro ZL1 wouldn’t pony up the extra $7,500 for the 1LE package. Even if you don’t plan to spend time at the road course, there is no question that the 1LE package makes the new ZL1 a far more aggressive machine.