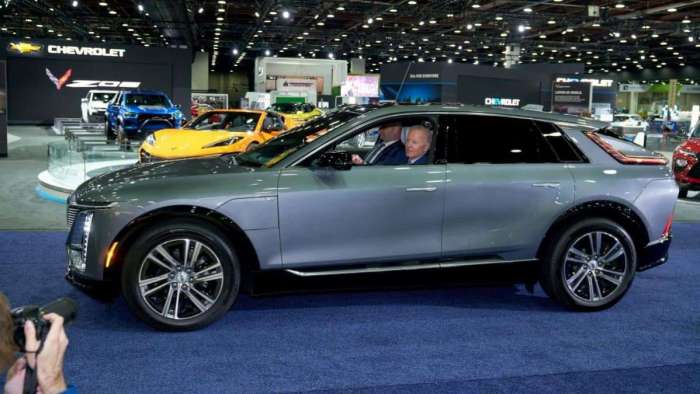 President Joe Biden today visited the show floor at the North American International Auto Show, in Detroit, Michigan. The president was greeted warmly by GM Chair and CEO Mary Barra as well as Ford Chairman Bill Ford. Biden toured the latest EVs on display and even drove the 2023 Cadillac LYRIQ EV through the aisles.

The president met with union leaders and several state and local representatives during his visit to the Motor City. His primary focus was highlighting the electric vehicles that are currently for sale or entering the market soon. During his speech, President Biden said “The great American road trip is going to be fully electrified.” The president has pushed legislation that will give tax breaks to Americans buying electric vehicles that are built by union employees in the U.S. During his speech President Biden also spoke of building a network of 500,000 electric charging stations through out the country. The sitting president often tours the NAIAS because Michigan an important swing state. While the voting base is heavily union and often leans Democratic, much of the state is also fiscally conservative.

The auto companies taking part in the revamped auto show have positioned their electric and electrified vehicles and concepts to draw maximum attention. The president was escorted to the 2022 Ford F-150 Lightning EV pickup that is setting sales records as well as the 2024 Chevrolet Silverado EV that already has over 140,000 serious buyers on wait lists. 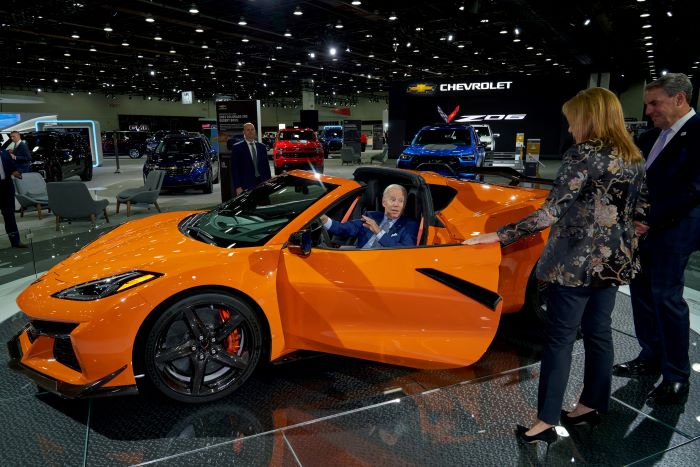 Not All the Fun Cars are Electric

President Biden has visited Detroit before to push electrification. Biden describes himself as a “car guy” and stopped during the tour to sit in Chevrolet’s 2023 Chevrolet Corvette Z06, which will be the most powerful gasoline-powered Corvette in history.
President Biden stressed through out his visit that the future of the auto industry is electric and that there is a boom in American electric vehicle production already underway.

We’ll have much more on the unveilings at the North American International Auto Show in the coming days.

Tesla Contemplates A New Strategy for China Retail even As Sales Boom
Jay Leno on Elon Musk & EVs: “I Think He Should Get ... Credit"
END_OF_DOCUMENT_TOKEN_TO_BE_REPLACED