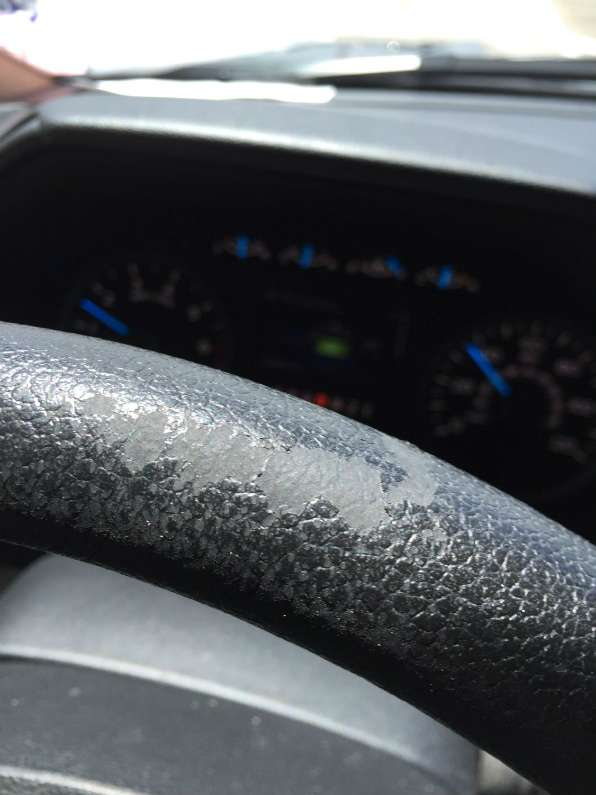 An owner of a 2015 Ford F-150 complained on a forum about problems with his steering wheel peeling and looking bad. Other owners are reporting similar problems.
Advertisement

An angry owner of a 2015 Ford F-150 started the conversation complaining that the leather-like finish on his steering wheel was disintegrating. Tenacious from Florida wrote “More falls off everyone time I drive, it's happening in a few spots. Anyone else have this happening?”

A driver who goes by Bleda agreed. “Not surprised, the leather on my steering wheel is probably the worst quality leather I've ever had in a vehicle. I honestly thought it was vinyl.”

An owner from Colorado was stunned. Platinum said “Are you wearing Gloves that might be abrasive? The wear looks unusual. I've owned many Leather F150 steering Wheels & never had a problem.”
A driver from Maine tried to help, “It's vinyl coated leather. The vinyl is flaking off. It's a covered repair under warranty if you take it in to your dealer.”

A Canadian driver is similarly angry, “Mine isn't peeling but it sure looks shiny and crappy, considering how fake and terrible the leather is I'd expect it to wear better.”

A woman from Colorado says her husband is having the same problem on his Ford Explorer, “Hubby has a Ford Explorer and it's doing the same thing... not leather. Definitely vinyl on steering wheel. Should be covered under warranty.”

A driver from Texas has noticed exactly the same thing with his 2015 Ford F-150, “I have a '15 XLT 302A as well and mine is doing the exact same thing...off to the dealership tomorrow.”

Surprising, another Ford owner says the problem isn’t limited to just trucks and SUVs. “Sadly it's not only a truck problem...The steering in my wife's 2015 Mustang with the imitation leather steering wheel is doing the exact same thing...Sooo I guess it's a trip to the dealer.”

Another trucker named Corey says “my 15 XLT had the same issue, took it to the dealer at 35,995k on the odometer and they got the approval to replace it. Back ordered till 2017 tho.”

Tenacious took his truck to the dealer and was approved for a new wheel. Because it was back-ordered it took several weeks to arrive. In the meantime a number of the other truck owners who were already out-of-warranty started ordering new, better made leather steering wheels from the dealer. Apparently most of them are easy to install and simply plug into the current wiring. There are questions about adaptive cruise control and heated steering wheels and what happens if the truck isn’t equipped properly.

One owner posted that he had purchased and installed a new wheel built for the Limited trim level and was very pleased. “Done like dinner! Easy peasy. Took half an hour from start to finish. Everything plugged in no problem and works perfect. What an upgrade!! This is the way it should've been.” The change is expensive, about $400. If you have the dealer install it, it can add over $100 in labor.

Dennis Robertson wrote on December 20, 2016 - 10:51am Permalink
very interesting article and I hope you get lots of feedback from Ford owners. Looks to me like someone at Ford was sloppy and did not do his homework assignment
Douglas Smith wrote on November 9, 2019 - 2:00am Permalink
I’m having the same problem with my 2016 F150 Platinum. I filed a complaint. Ford called today and approved my new steering wheel under my extended warranty
Don young wrote on March 1, 2021 - 4:52pm Permalink
Thanx. You said u filed complaint. At dealership or Ford. Mine is doing exact same thing
Argy wrote on September 13, 2018 - 4:36pm Permalink
2013 F-150 XL, the steering wheel was fine when I bought it and over the last five or six months has begun just crumbling away all across the topmost part. This isn't vinyl or leather, it's some cheap compressed rubber. More comes off on my hands every time I drive. There is a sharp ridge beginning to be exposed across the top that is not wearing as quickly as the material on the front and back side, and it makes it very uncomfortable to drive. If I stick to 10 and 2 all the time instead, it will just start wearing there, too. Pretty sad how cheap this is, considering these were 20k + new.
Pat J Wright wrote on November 3, 2018 - 8:55pm Permalink
I have the same problem on a 2015 Ford Edge Sport. I will call the dealer. Nice to find this post.
Dennis Mraz wrote on November 29, 2018 - 10:33am Permalink
I have a 2015 Focus that's 3 months past its warranty. I noticed since Jan 2018 my rubber over the steering wheel is thinning and flaking away. Something I did not expect for a 3 yr old care. My extended warranty does not cover this. Not a happy camer.
Lonnie williams wrote on May 7, 2019 - 7:46pm Permalink
My 2015 lariat has this steering wheel issue unfortunately out of warranty long ford truck owner I have never had this happen.i read on internet some people are changing to different wheel . Are replacement wheels fixed or will it fail also.
Ken wrote on May 19, 2019 - 6:57pm Permalink
Same problem on my 2016 Explorer
Roberto wrote on May 21, 2021 - 11:07am Permalink
I have the same issues on my F350 king ranch The top part pealed completely

Tesla Contemplates A New Strategy for China Retail even As Sales Boom
Jay Leno on Elon Musk & EVs: “I Think He Should Get ... Credit"
END_OF_DOCUMENT_TOKEN_TO_BE_REPLACED