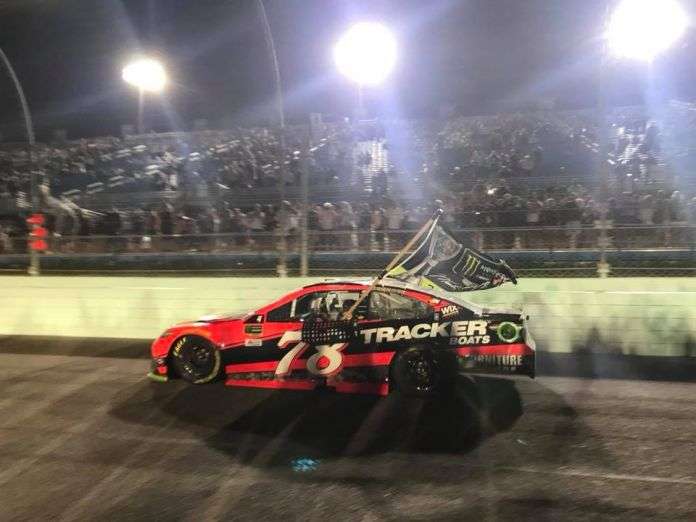 Despite a brutal football season, Denver finally has a championship to celebrate. Martin Truex Jr. managed to hold off Kyle Busch and win the 2017 Monster Energy NASCAR Cup. Truex was driving a 2018 Toyota Camry as he won the Ford EcoBoost 400, at the Homestead-Miami Speedway. Truex led 78 laps in the finale to take the checkered flag on the 1.5-mile track to win his first Monster Energy NASCAR series title.

“It’s just overwhelming,” Truex Jr. said, in tears. “To think about all the rough days and bad days, the days that couldn’t run 20th, to be here, I never thought this day would come and to be here is so unbelievable.”

Truex has had a difficult season despite his winning record. His longtime girlfriend, Sherry Pollex, had a recurrence of cancer. According to NASCAR Pollex is battling stage III ovarian cancer. Pollex, 37, had her second trip through intense chemotherapy treatment after doctors located a Ping Pong ball-sized recurrence of cancer in her spleen this summer. Surgeons removed her spleen. Truex has been very emotional whenever he discussed Sherry’s health.

The #78 team was also touched by tragedy this year. Race team member, Jim Watson, died suddenly during one race weekend. Team owner Barney Visser also had a heart attack and was forced to miss some of the races.

According to NASCAR, Sherry reacted to Truex’s win saying “I told him that's why you never give up”. Sherry has her own website, Sherrystrong.org, because fans have been so supportive in her cancer fight.

It has been a difficult year for NASCAR as a whole. This was the first year of a controversial new format. The traditional race was broken up into three shorter segments to try to hold fans’ attention. Attendance at the racetracks has fallen and it is clear on television broadcasts that many prime seats are often empty.

As the sport faces an uncertain future, it doesn’t help that a fan favorite, Dale Earnhardt Jr., is retiring for health reasons. Junior did stop by Victory Lane to offer his congratulations to both Truex and Sherry. “It’s so good to see him win this title!” said Earnhardt Jr.

Truex entered the Ford EcoBoost 400, the final race in the playoffs, as the favorite, his No. 78 Toyota team won three races in the playoffs. However, due to the change in format, those points didn’t matter in the race today. To win, Truex had to finish better than the other playoff contenders, Kyle Busch, Brad Keselowski and Kevin Harvick and he did!

It was the first Monster Energy Series title for the Denver-based Furniture Row Racing as well. It was the second championship appearance for Truex and the No. 78 team. He finished fourth in 2015.

Keith Dahl, the head of motorsports for Toyota, said in a statement, “To be able to win the Cup title in the first season racing the new 2018 Toyota Camry is truly remarkable and displays the effort TRD and Calty Design put into preparing this championship-winning Camry.”

The Furniture Row Racing team has yet another reason to celebrate. Truex’s teammate, Erik Jones, was chosen the Sunoco Racing Rookie of the Year!