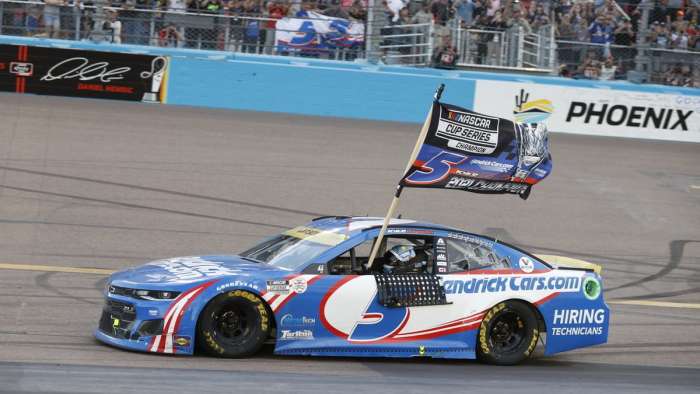 The 29- year-old was emotional as he discussed the win saying that the possibility of winning hit him as he was riding around the track in a truck during driver introductions before the race. He said he had tears streaming down his face then.

“I cannot believe it,” said Larson after the race. “I didn’t even think I’d be racing a Cup car a year and a half ago. To win a championship is crazy.” Larson was very gracious about his victory, thanking his pit crew and calling them the true champions. He also thanked his team owners and supporters. “I’ve got to say first off thank you so much to Rick Hendrick, Hendrickcars.com, Jeff Gordon, NASCAR, every single one of my supporters in the stands, watching at home, my family. I’ve got so many of my friends and family here. My parents, my sister, my wife and kids.

“What a great way to finish the season. This is great day,” said Jim Campbell, Chevrolet U.S. Vice President of Performance and Motorsports, in a news release. “Congratulations to Kyle Larson, Cliff Daniels and the No. 5 HendrickCars.com Camaro ZL1 1LE team on winning the NASCAR Cup Series Championship. Kyle ran consistently up front all year long. The crew executed efficiently in the pits. Cliff and the engineers called the right race strategy throughout the season. Congratulations to Kyle on becoming Chevrolet’s 33rd Cup Series Driver’s Champion.

“We have been proud partners with Rick Hendrick and Hendrick Motorsports for over 38 years, and want to also congratulate Rick and the organization on earning their 14th NASCAR Cup Series title.”

Larson is the first driver to win 10 NASCAR races in a season since Team Chevy Jimmie Johnson in 2007. Larson had every reason to be emotional. He was serious about not being sure he would be in NASCAR. He was let go by Chip Ganassi Racing in April of 2020 but was picked up by Hendrick Motorsports for the 2021 season.

The National Association for Stock Car Auto Racing or NASCAR Cup Series returns to competition with the Daytona 500 season-opener at Daytona International Speedway on February 18, 2022.

LG's New EV Battery Plant Is a Welcome News for Tesla
Tesla Giga Berlin's New Hurdle: It's Not Only the Gov't, but Now Tesla Itself
END_OF_DOCUMENT_TOKEN_TO_BE_REPLACED