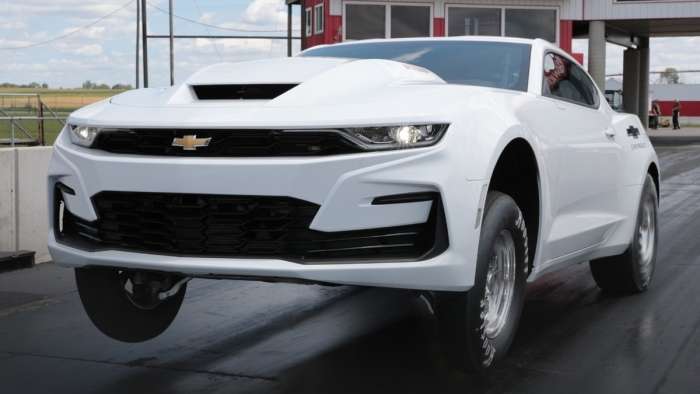 Chevrolet is putting its largest V-8 in a 2022 COPO Camaro. Too bad it is designed for the drag-strip only!
Advertisement

While most of the talk in vehicles right now is about electric vehicles and chip shortages, there is a pony car loudly revving its engine in the backround. Chevrolet quietly announced that it is making a 2022 COPO Camaro available with a huge Big Block V-8. The 2022 Chevrolet COPO Camaro can be factory-outfitted with a 572-cubic-inch Big Block V-8 and it carries with it the magic and mystique of the original 1969 COPO Camaro.

The 2022 COPO Camaro is a descendant of the original 1969 COPO Camaro. Chevy brought back the racing specific COPO Camaro in 2012. COPO stands for Central Office Production Order and back in the day dealers used the COPO system to special-order Camaros with the largest V-8 Chevrolet produced. The cars were specifically built to be drag racers. According to Chevrolet, “The COPO 572 uses a cast-iron block with four-bolt main caps, aluminum heads, a forged steel crankshaft, forged steel connecting rods and forged aluminum pistons.” Pricing for the COPO Camaro with the 572 starts from $105,500 (excluding tax, title, license, and dealer fees).

Chevy says the COPO Camaro can only be used to race. “The COPO Camaro is sold as a Chevrolet Performance part and cannot be registered for street use. It competes in NHRA Stock and Super Stock eliminators and comes standard with a carbon fiber hood and wheelie bars.” Buyers can also outfit their cars with options such as a trunk-mounted weight box and a parachute.

The 572 engine is the only Big Block V-8 Chevrolet has offered since restarting the program in 2012. At this point, Chevy is not releasing the horsepower and torque ratings. The 2022 COPO Camaro is also available with the LSX-based Small Block engines. One is a supercharged 350-cubic-inch V-8 rated by the NHRA at 580 horsepower and a naturally aspirated 427-cubic-inch V-8 with an NHRA-rated 470 hp. All 2022 COPO Camaros use an ATI Racing Products TH400 three-speed automatic transmission.

Chevrolet has only built about 700 COPO Camaros since the program restarted in 2012. In previous years, Chevrolet only built 69 cars per year. Chevrolet is not limiting production for 2022, and orders will be filled on a first come, first served basis. Much like the special attention paid to Corvette customers, buyers are also invited to participate in a private tour of the COPO Build Facility in Oxford, Michigan, where each car is custom made.

Obviously, there is limited demand for a car that can only be driven at the dragstrip. However, its mere existence proves that there will always be a demand for a great muscle car.