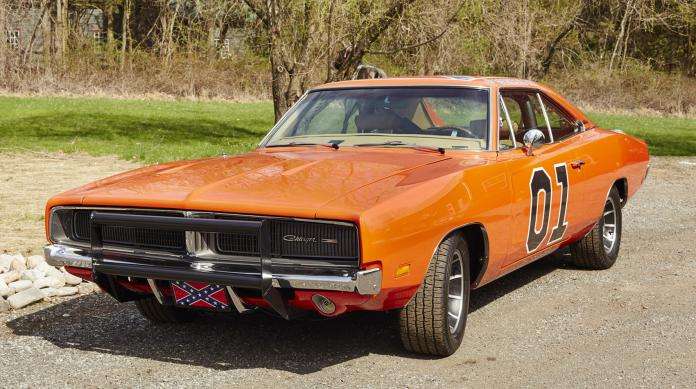 The 1969 Dodge Charger, known as the General Lee, in the Dukes of Hazzard, is one of the most iconic television vehicles of all time. Now the General Lee, owned by the man who played Bo Duke is going up for auction.
Advertisement

One of the most recognizable vehicles from the early 1980’s is going on the auction block. The 1969 Dodge Charger known as the General Lee is considered one of the main attractions of the upcoming Mecum Auction, in Las Vegas.

There are many replicas of the General Lee. You see them at car shows across America. However, this General Lee was owned by the series star, John Schneider. Schneider played Beauregard “Bo” Duke, in the series that ran from 1979-1985. In the television series, Bo Duke is an ex-stock car driver, who drives The General Lee most of the time, with his cousin Luke Duke riding shotgun. Virtually every episode features a crazy chase scene with the General Lee performing great jumps and stunts as the Duke boys escape from the crooked county commissioner Boss Hogg and the corrupt Sheriff Rosco P. Coltrane.

According to Mecum, this General Lee has a 360 CI engine, not the famous Hemi. Unlike the television show stock car versions, it has an automatic transmission. The orange paint has been meticulously matched to the show versions, with every detail duplicated.

This General Lee has some very special selling points. The inside of the trunk lid is signed by the cast of the Dukes of Hazzard. There is also a book with the original cast members attending the August 2012 homecoming in Virginia. There is an authenticity letter, as well as several Mopar Collector Guide articles about the General Lee.

According to various sources, Schneider learned to drive the Dodge Chargers that were used in the television show but he was never allowed to drive during the jumps because the stunts were considered too dangerous.

This General Lee still sports the Confederate flag painted on the roof as well as the license plate, as it appeared in the Dukes of Hazzard. The flag is much more controversial now than it was when the show originally aired. Golfer Bubba Watson owns the original General Lee that was used to shoot the opening scenes of the television show. According to the BBC, Watson announced that he would remove the Confederate flag from the roof of General Lee 1 and repaint it with the US flag.

Mecum is not releasing an estimate for how much they expect the car to bring at auction. The General Lee will be one of the main attractions during Mecum’s Las Vegas auction, November 16-18, 2017.

Darlene wrote on October 11, 2017 - 2:54am Permalink
I am interested in the auction for General Lee
Pete Best wrote on October 11, 2017 - 9:45am Permalink
Wow why would you destroy a perfect iconic car just because of politics? That is crazy. This country is turning away from democracy and into a communistic country. What the hell. The country is taking away our past our way of thinking and our freedom of speech.
True white american wrote on July 25, 2020 - 11:15pm Permalink
You are right this our hertiage and what right that a group of free loaders have say to what is right or wrong beside it was there on people that sold them and they were criminals that were sold beside why cry over spilt milk that all on past but thy cant let it go and it ashamed that whites just set back and pet the communist that hate america so much get what thy want if you dont like america and want to destroy it and steal from honest people and destroy history leave
Tim Wylie wrote on January 23, 2021 - 4:14am Permalink
It's all poor poor pitiful me...they can't take coming from a slave past. They don't understand your past is just that...your past...but instead of working make the future better, they figure to destroy others heritage while sitting on their ass and live off the everyone else who didn't have a damn thing to do with their dead relatives past. They need to get a life and as far as bubba redoing the flag, he bought the car liking the flag on it if he wants to ruin the car....then general 2 will be new general 1 because without the flag...he's just got an orange car. . .
Nate Laws wrote on October 11, 2017 - 9:58am Permalink
I’m interested in the auction
Nichole wrote on October 11, 2017 - 6:15pm Permalink
I wish I could buy General lee that was my mom and dad favorite show. And my dad said on his death bed I wish I could buy the car.
Mack Brown wrote on October 13, 2017 - 7:44pm Permalink
I am interested in the General Lee car
Brian lassabe wrote on October 6, 2018 - 6:55pm Permalink
It’s a piece of history. The confederate flag is not a sign of racism. Learn what the flag means before you take it off. This car is an icon. Leave it be
Robert gooding wrote on November 24, 2019 - 10:48am Permalink
I've always loved this car
Jeannie Taylor Bodie wrote on May 17, 2020 - 9:03pm Permalink
My dad sold the show 3 or more cars to the producers. He would watch and point out the difference in the years by grills and tail lights. He sold one orange one painted up with 01... He passed last year but he lived in and loved 1969 chargers...
Kyle Lichtenstein wrote on June 30, 2020 - 6:03pm Permalink
The General Lee inspired me, as a young child to pursue auto racing, and have become a driver in the Outlaw class. Best stunts ever really performed!
Andre T Morris wrote on August 23, 2020 - 1:01pm Permalink
racism is racism no matter how you color it.
Wes Hunter wrote on April 6, 2021 - 6:41am Permalink
How much is the General Lee?