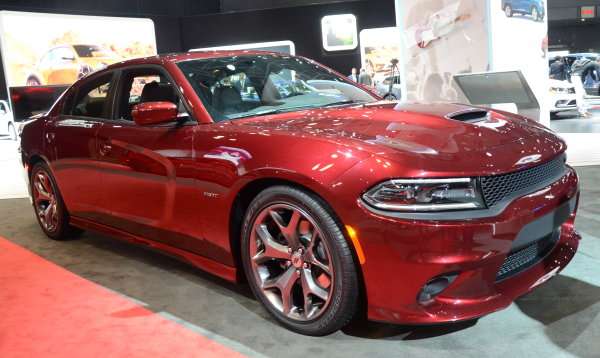 The Dodge display at the ongoing 2017 New York International Auto Show is focused around supercharged muscle cars packing the Hellcat Hemi, but the 2017 Charger R/T fitted with the new Super Track Pack might appeal to a broader audience of buyers – combining the aggressive design of the Hellcat Charger with the low price point of the basic Charger R/T.

Dodge Charger Exterior Design
If you are familiar with the current Dodge Charger, you are likely aware of the fact that the muscular sedan comes with two very different exterior design packages. The Charger SE, SXT and R/T all come with a crosshair grille set above a V-shaped lower fascia opening, flanked by elongated fog light housings. The Charger Daytona, Scat Pack, SRT 392 and Hellcat all have the same headlights as the SE, SXT and R/T models, but these higher performance models have a far more aggressive front fascia design. Like the Hellcat, the Daytona, SRT 392 and Scat Pack Chargers all have a narrower upper grille without the crosshairs, with a larger lower fascia opening which extends up into the upper portion. This larger lower air intake is flanked by a set of smaller fog light housings and along the bottom is a sculpted chin spoiler.

Next, while the Hellcat, SRT 392, Daytona and Scat Pack models all have a hood scoop, the Charger SE, SXT and R/T do not and in addition to the wheel design, the side skirts of the higher performance models are more aggressive, reaching further towards the ground.

The bottom line is that the Scat Pack, Daytona, SRT 392 and Hellcat are all more aggressive and sportier than the SE, SXT and R/T models. It might make sense for the V6 models to not have the SRT appearance package, but for those folks who buy the Charger R/T – which has many of the same components as the Charger Daytona – their R/T is the only Hemi-powered model that doesn’t get the sporty exterior.

That changes with the newest Super Track Pack, which brings the SRT exterior design cues to the least expensive of the Hemi-powered Dodge Chargers.

Up front, the Charger R/T Super Track Pack adds the same front fascia design which is found on the Daytona and all of the 6.4L and Hellcat-powered models. There is also an SRT hood with an integrated hood scoop, the aggressive side skirts and the SRT rear fascia – essentially bringing the looks of the 2017 Charger Daytona to the “base” Charger R/T.

Best of all, the Super Track Pack for the 2017 Charger R/T has an MSRP of just $1,205, so buyers get the wheels/tires, the performance brakes, the sport tuned suspension, the performance steering wheel, the performance stability control system and all of the SRT exterior bits while keeping the final price well under $40,000. Figured that the Charger R/T starts at $34,895, so when you add in the $1,095 destination fee and the cost of the Super Track Pack, the price of this well-appointed muscle sedan is just $37,195.

I far prefer the look of the Daytona, Scat Pack, SRT 392 and Hellcat exterior design, and with those models accounting for the majority of Charger sales - it makes sense to bring the high performance look to all of the Hemi-powered models.