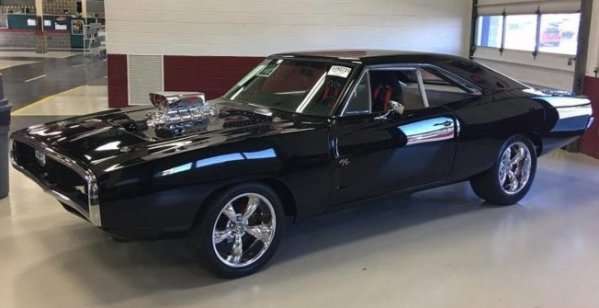 The customized Dodge Charger shown above was driven by both Paul Walker and Vin Diesel in the Fast and Furious movie series, and tomorrow it will be sold at the Manheim Xtreme Spring Auction in Pennsylvania – although this isn’t quite the classic Mopar collectable that it appears to be in the movie.
Advertisement

At some point in most of the Fast and Furious movies, Dominic Toretto (played by Vin Diesel) drove a classic Dodge Charger in either a chase scene or a race scene. The first movie in the series – The Fast and the Furious – ended with Toretto flipping his father’s supercharged 1970 Dodge Charger at the end of a drag race with Brian O’Connor’s (Paul Walker) Toyota Supra.

That infamous street race secured The Fast and the Furious as a staple of the automotive world, leading to at least 7 more movies since then. In most of those movies, the classic Dodge Charger makes an appearance – if not playing a key role in the story. There have been hundreds of different vehicles featured in the Fast and Furious series, but none have been as heavily featured as Dom’s Dodge Charger and tomorrow at the Manheim Xtreme Spring Auction in Pennsylvania, you can buy one of the actual Dodge Charger movie cars from the Fast and Furious series.

Dom’s Dodge Charger
The car above appears to be the supercharged 1970 Dodge Charger from the original The Fast and the Furious movie, but it is actually a car from the 4th movie (Fast and Furious) and the 5th movie (Fast Five). However, since surviving the filming of those two movies, it has been refurbished to look like Dom’s Charger in the 1st movie for promotional purposes. During the course of filming the 4th and 5th movies, both Vin Diesel and the late Paul Walker spent time in the driver’s seat, so this is most certainly a fantastic movie collectable – but it isn’t the Mopar collectable that is appears to be.

This 1970 Dodge Charger is actually a 1968 Charger which has been modified to look like a 1970 Charger, but it doesn’t have the 1970 grille or side marker lights. It also doesn’t have any of the factory interior bits, but far more importantly, it does not have a supercharger Mopar V8. Instead, it has a fake supercharger mounted above the engine and instead of a high performance Mopar engine, it has a fairly tame looking 350 cubic inch small block Chevy V8 – one like you might see in your neighbor’s 1988 Chevy pickup. Why would they have gone with such a low performance, non-Mopar engine? Because they dont need the car to actually be fast and this 350 small block Chevy V8 surely cost far less to build than the big block Mopar that you would expect to be under the hood of a 1970 Charger.

There is plenty of cool factor with this 1970 Dodge Charger, but with the Chevy engine and a mishmash of body parts from different years, this isn’t going to attract many high-dollar Mopar collectors. Of course, a deep-pocketed Mopar collector could buy this car, rip that Advance Auto Parts 350 out of it and drop in a Mopar 440 that is actually supercharged to restore Dom’s dad’s car to its glory from the first movie.

Engine and body bits aside, based on the provenance and the story behind this unusual 1970 Dodge Charger, it is still expected to fetch at least $200,000 at tomorrow’s Manheim Xtreme Spring event in Pennsylvania. It might not be a proper Mopar muscle car, but this classic Charger is still a major piece of modern automotive movie history and it will surely draw some big money bidders at tomorrow’s auction.