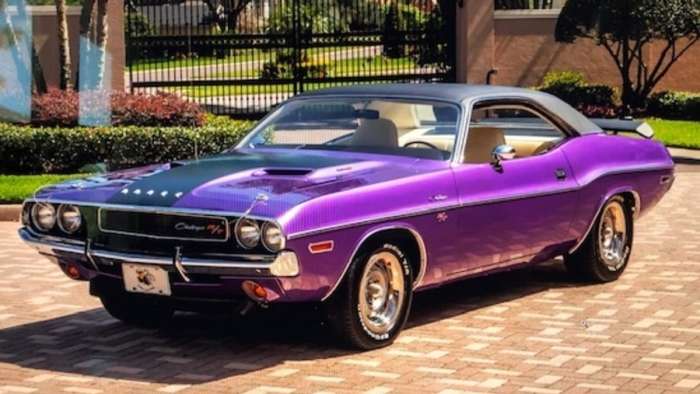 An extremely rare 1970 Dodge Challenger R/T is coming up for auction. This car is so perfect it is on the Chrysler Registry.
Advertisement

One of the most loved of all muscle cars is the 1970 Dodge Challenger R/T and an upcoming Mecum Auction has a pristine one about to cross the auction block. This particular Challenger is in the famous Plum Crazy original color and comes complete with the car’s original sticker and the original broadcast sheet detailing the special equipment that was ordered.

The car is so clean that it is one of the featured lots for the Mecum Auction scheduled for July 29-31, 2021, in Orlando.

The sticker says the car was built in Hamtramk, Michigan, and ordered by Pickard-Dunn Dodge of Greensboro, North Carolina. The price at the time was a whopping $4,090.45. According to the document from the Chrysler Registry, this vehicle is #61 of 253 of all known 1970 383-4BBL Dodge Challenger R/T 2-door hardtops known to still exist. It does not suggest who owned the beauty. The listing does not give the mileage or say if all the numbers match on the car.

For more on the 1970 Dodge Challenger R/T in Plum Crazy check out the Mecum listing for the July 29-31, 2021 Auction in Orlando, Florida.