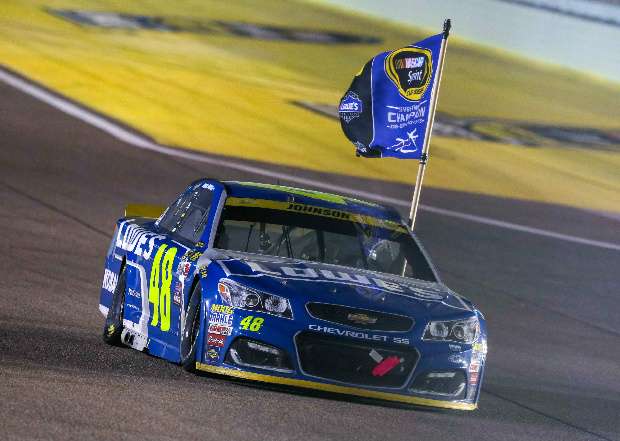 How Jimmie Johnson raced into the record books

Not only did Jimmie Johnson finally win his first Homestead-Miami race, but he raced right into the NASCAR record books. His name will be alongside driving greats Richard Petty and Dale Earnhardt Sr. as the only drivers to win seven NASCAR championships.

Mark Reuss, head of product development for General Motors, and longtime racing fan perhaps described it best on his Facebook page. Reuss called the win, “Storybook. One for the ages and history.” Johnson says “So thrilled to be in this moment, so grateful for the opportunity and so thankful and blessed. I am at a loss for words.”

It was a win that even Jimmie Johnson didn’t think was likely. Even though he qualified to start 14th, he was forced to start in the back of the pack because of an unapproved body change. He continually worked his way up through the pack. However, his big break came with just ten laps to go when Joey Logano triggered a ten-car crash that forced a red flag. Two re-starts later Johnson was able to bring home the win.

In a Chevrolet release Johnson says, “Just beyond words, Just didn't think the race was unfolding for us like we needed to do to be the champs, but we just kept our heads in the game. Chad (Knaus, crew chief) called a great strategy, made some great adjustments for the short runs. Luck came our way and we were able to win the race and win the championship.”

41-yr-old Johnson is known as one of the most disciplined drivers. He is envied for his workout schedule and great physical shape and is considered one of the nicest drivers in the sport. He is also one of the most gracious, always granting interviews. He frequently makes appearances for Chevrolet at shows and special events. He is known for never giving up even when he starts at the back of the pack.

Chevrolet’s head of Performance and Racing, Jim Campbell says, “Congratulations to Jimmie Johnson, Chad Knaus, Rick Hendrick and everyone at Hendrick Motorsports on another championship, Jimmie overcame adversity several times throughout the race. He started from the rear of the field and drove steadily up the field. Late in the race, he avoided that multi-car wreck and kept himself in a position to put his name in the record book once again. He never gave up. Seven championships, incredible. That is an amazing feat and just further reinforces his legendary status.”

It is important to note that Johnson already held the record for winning the Championship the most times in a row, winning five from 2006 to 2010.

This championship cements Johnson’s place as one of the best drivers of all time.