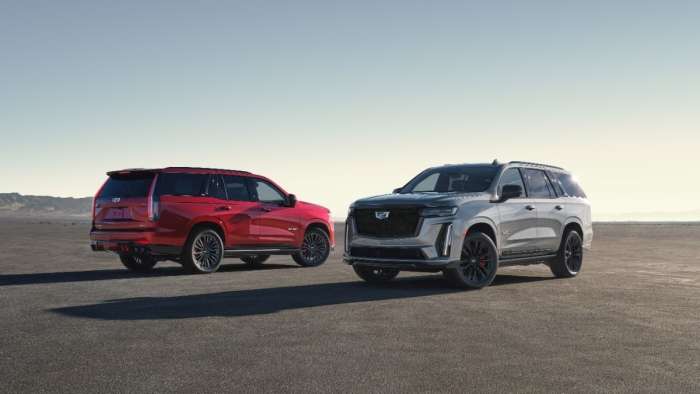 Cadillac is releasing the first video of its 2023 Cadillac Escalade V Series. This will be the first time that Cadillac has shared the high performance technology with its massive SUV.
Advertisement

Cadillac is planning a new high-powered version of its luxury Escalade SUV. The automaker is releasing video and audio of the high-performance version of the premium family hauler which is sure to pique the interest in drivers who don’t want to sacrifice performance even though they have to ferry passengers around. Listen to the 2023 Cadillac Escalade V.

2023 Cadillac Escalade V Will Be the First V-Series SUV

This will be the first time that Cadillac has shared its V-Series technology with any of its SUVs. According to Cadillac, “With nearly two decades of racing-inspired prowess, the V-Series designation is reserved for vehicles that encompass the peak of Cadillac performance, bold, distinguished design, and innovative technology.”

Cadillac won’t release the full vehicle specs until spring of 2022. That is also when it will release details about the 2023 Cadillac Escalade V’s availability.

Currently the CT5-V Blackwing is Cadillac’s most powerful vehicle. According to Cadillac, “The CT5-V Blackwing uses an upgraded 6.2L supercharged V8 that, thanks to a higher flow air-intake and revised exhaust system, is rated at 668 horsepower (498 kW) and 659 lb-ft of torque (893 Nm), making it the most powerful production Cadillac ever. Each engine is hand-built at GM’s Bowling Green Assembly facility in Kentucky and features a signed engine builder’s plate.”

The most powerful 2022 Cadillac Escalade runs on a 6.2L V8 that is rated at 420 horsepower and 460 lb-ft of torque. It can’t be that hard to supercharge that engine and secure even more incredible performance. The Cadillac Escalade has proven extremely popular in the last year despite the semiconductor chip shortage. Sales for the massive SUV were up dramatically, with many buyers paying well over sticker just to land one. I know personally of one family, in Denver, that waited weeks for one to become available. They thought they had a chance at one that was delivered to a local dealer, but it was sold out from under them. They finally were able to get one, but it took time, and they paid a premium. Surely, there will be an appetite for a super-charged version.

It is interesting that Cadillac is investing in boosting the power from an internal combustion engine, even as it is investing billions in converting to electric vehicles. It is a sign that the automaker understands the desire for premium ICE vehicles despite the push for electrified vehicles.