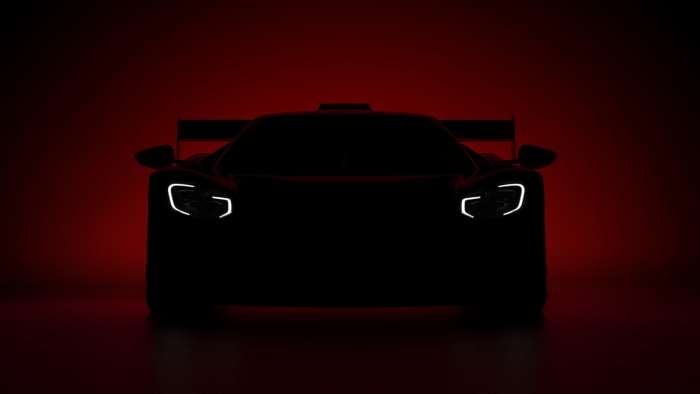 Ford is teasing yet another version of its Ford GT supercar. This one will have a huge wing on the back. What is the Blue Oval planning?
Advertisement

Ford is teasing a new update on its high-performance Ford GT supercar. Ford says it will release exciting news on July 4th, but the news will come from the Goodwood Festival of Speed in West Sussex, England. Ford has become more involved at the Goodwood Festival in the last few years. The festival is known world-wide and Ford has made a point of sending some of its most popular vehicles, like the Ford GT and the Ford Mustang Shelby GT500 there.

Ford just wrapped up the Ford GT’s last racing appearance at the 24 Hours of Le Mans. Could the announcement be that the GT will move to a different race division instead of Le Mans? The vehicle in the tease photo has a large wing on the back. Previous versions have had wings but not as large.

Could it be that Ford is planning to give its street version even more horsepower? Ford just released details about its 2020 Ford Mustang Shelby GT500 having 760 horsepower and 625 lb.-ft. of torque from a supercharged 5.2-liter V8. The current Ford GT is rated to get about 650 horsepower and 550lb-ft of torque from its twin-turbocharged 3.5L EcoBoost V6. The engineers at Ford could be working on a way to boost the GT’s horsepower and torque.

The Ford GT is the company’s halo-car, known for its sleek style and high demand. The vehicles are incredibly exclusive. Ford and its partner Multimatic only build about 200 a year.

Ford is only saying that Hermann Salenbauch from Ford Performance and Larry Holt from Multimatic will both be at Goodwood for the special announcement on July 4th.

Ford is confirming that the 760 horsepower Mustang Shelby GT500 will also be there. Both the GT500 and the Ford Chip Ganassi Racing #66 Ford GT race car are expected to make the 1.16 -mile Goodwood hill climb.

There is an aura surrounding the Ford GTs. Ford has made the ordering process very rigorous, requiring potential buyers to fill out long questionnaires and requiring buyers to display the vehicles, usually for charity events. Buyers also promise to keep the vehicles for a certain period of time. Ford has sued owners, like actor/wrestler John Cena, for selling the cars before the contract period was up.

We just have a little more than a week to wait for news about the future of the Ford GT, it sounds like the supercar could be even more dynamic.