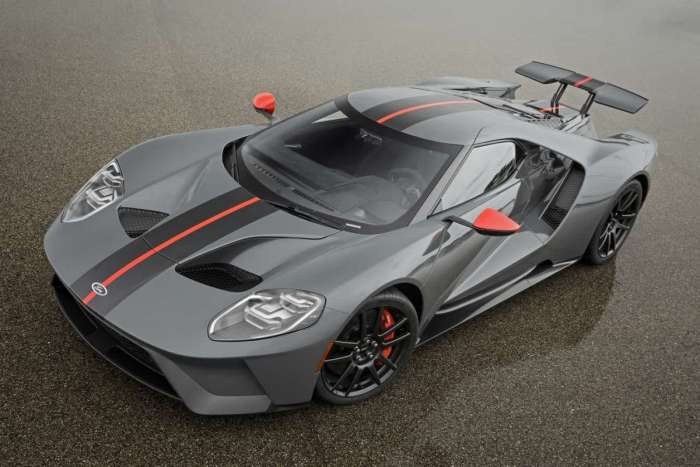 As if the Ford GT isn’t exclusive enough already, Ford is debuting a 2019 Ford GT Carbon Series. If you are already approved to buy a Ford GT, you can order the new GT Carbon Series now. Otherwise, Ford will open up the application process for anyone who wants to try and qualify to buy one of the supercars on November 8, 2018. Ford announced earlier this month that it will be producing 350 more of the incredibly sleek and powerful 650 horsepower supercars over the next few years. In all, Ford will produce approximately 1350 during this limited production run.

The newly announced 2019 Ford GT Carbon Series will be the lightest car in the company’s GT lineup. The company has lightweighted the Carbon Series, saving nearly 40 pounds by using more carbon fiber, a titanium exhaust, titanium lugnuts and a polycarbonate engine cover.

The 2019 Carbon Series replaces the earlier Ford GT Competition Series model, and adds in a couple of important amenities like a radio and air conditioning. It can still blow the doors off most of the competition at the track but you do have some minimal creature comforts.

Ford added a little humor in announcing the new Carbon Series saying, “Ford engineers added just enough conveniences – air conditioning, a radio and SYNC® 3 – for those customers who want to drive to and from the track in comfort. But they drew the line to keep the weight in check by removing cupholders and the driver’s side seat storage bin.”

I don’t think anyone buys a supercar and worries about cupholders. Call me crazy.

In an unusual design move, Ford left the bare carbon fiber dual exposed stripes right down the center and added matching accents on the mirror caps and calipers to set the 2019 Ford GT Carbon Series apart from the other models. Ford will offer the accents in four different color options.

“The Ford GT Carbon Series stands out on the road with its striking carbon fiber-rich design and on the track with its athleticism,” says Hermann Salenbauch, global director, Ford Performance. “It is yet another example of how we can bring to life our Le Mans-winning supercar in new and exciting ways so our customers can share in that magical legacy.”

“This is just another example of how we listen to our customers at Ford,” says Lance Mosley, marketing manager, Ford Performance. “While the Ford GT Competition model appeals to hardcore racing enthusiasts, we found more customers asking for more exposed carbon fiber with the air conditioning and radio still intact. So we developed the Carbon Series to satisfy that need, while providing a distinct look.”

At this point, Ford isn’t saying if the lighter, carbon Ford GTs will have a higher top speed than the current models’ 216 mph. The 2018 Ford GT was rated to get about 650 horsepower and 550lb-ft of torque from its twin-turbocharged 3.5L EcoBoost V6. Once those numbers are released, you can compare them here.

Ford is also not saying what the price will be for the 2019 Ford GT Carbon Series, but they only intend to build one per week.

Ford’s application process for the GT program will open on November 8, 2018 and remain open for 30 days. You can submit your application at www.FordGT.com.