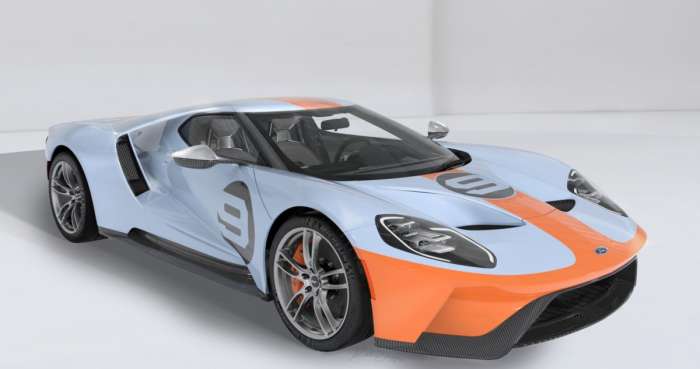 Ford Donating a 2019 GT to Help the United Way

Here is your chance to get a brand new 2019 Ford GT supercar, if you aren't on Ford's list. It will cost you big bucks but it will be an incredible tax write-off!
Advertisement

The Ford GT is one of the most difficult cars in the world to obtain because Ford makes you go through a qualifying process to get on their list. Ford makes prospective buyers promise to hold on to the car for a certain length of time and promise to display the vehicle, or use it for charity fundraising. Plus, Ford only produces about 250 of the supercars annually. Now you have the opportunity to land a 2019 Ford GT, when it goes up for auction in January.

Ford will sell a 2019 Ford GT Heritage Edition with limited-edition Gulf Oil racing livery at the Barrett-Jackson Collector Car Auction in January. Ford will donate the proceeds from the auction to the United Way for Southeastern Michigan.

The special Gulf Oil paint scheme celebrates the 50th anniversary of the 1968 and 1969 Le Mans-winning GT40 that became one of the most recognizable racecars of all time. The Ford GT40 beat Ferrari 50 years ago to make racing history. The 2019 Ford GT Heritage Edition that will be auctioned will sport the VIN 001.

The vehicle is expected to be one of the top sellers at the 48th Annual Barrett-Jackson Collector Car Auction on January 19, 2019, in Scottsdale, Ariz. Because the money goes toward charity, most of the purchase price should be a tax write-off, sending the bidding amounts even higher.

“The 2019 Ford GT Heritage Edition instantly became one of the most anticipated cars in the world with its famous paint scheme,” said Joe Hinrichs, Ford’s president, Global Operations. “This car’s amazing history should help the United Way for Southeastern Michigan raise a lot of money to advance their mission of helping make lives better in our communities.”

According to Ford, “This car celebrates the final pair in a remarkable string of four consecutive Le Mans overall victories for Ford. The same Ford GT40 (Chassis No. 1075) won the race in 1968 and 1969. Sponsored by Gulf Oil both years, it is the only post-war car to win the race twice in a row.”

Ford is introducing a special carbon fiber edition of the GT in 2019.

The 2019 Ford GT Heritage Edition celebrates the winning race car with the famous paint scheme, along with exposed carbon fiber accents for both the interior and exterior.

The exterior features exposed carbon fiber A-pillars and sports unique 20-inch one-piece forged aluminum wheels in high-gloss dark stainless with black lug nuts. Orange calipers and silver rearview mirror caps complete the look.
For 2019 only, the package features the No. 9 graphics on the hood and doors as well as a ghosted image on the interior door panels. The 2019 Ford GT Heritage edition also sports leather seats with special blue and orange stitching. It has polished anodized paddle shifters.

“Ford Motor Company has been a long-standing supporter of United Way's work throughout our 100-year history," says Darienne Driver, president and CEO, United Way for Southeastern Michigan. “This incredible donation will allow us to enhance our efforts toward ensuring more families in underserved communities across southeast Michigan have access to the resources they need to thrive.”