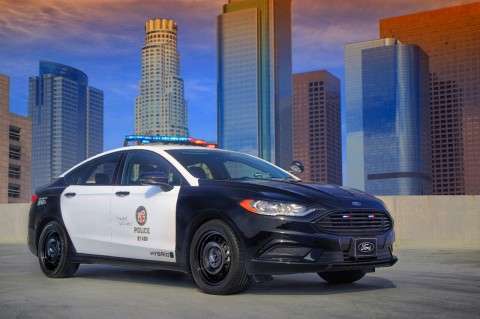 Ford has developed a way to help cities fight crime and fight rising costs at the same time. The automaker is unveiling a new “pursuit-rated hybrid police car” to cut down on the cost of gasoline.

Ford unveiled the all-new Police Responder Hybrid Sedan in both Los Angeles and New York. The new Responder is based on the Ford Fusion Hybrid. Like other Ford police vehicles, the Responder has a reinforced chassis and suspension to survive the grueling police demands.

Ford is investing nearly $5 billion into its electrification plans. It is promising to introduce 13 new electric vehicles globally within the next five years, including hybrid versions of its popular Ford F-150 and Mustang. It is also promising a self-driving hybrid and a small SUV with an estimated range of 300 miles. Ford says that millennials are particularly interested in electrification. Supposedly up to 50 percent of millennials are interested in buying an electric car.

Ford claims each new Responder could save cities nearly $4000 per year, in gasoline costs, compared to its popular Police Interceptor model, based on the Ford Taurus. According to Ford, the pursuit rating means that “the car is certified by police agencies to be tough enough to handle police pursuits for longer periods at different speeds and over obstacles such as curbs and flooded intersections.”

Ford already sells the most police vehicles of any automaker in the U.S. It has a 63 percent market share with models based on the Taurus and the Ford Explorer.

The new Responder Hybrid Sedan will be tested by the Los Angeles police. Charlie Beck, Chief of the LAPD, says in a statement, “Our mission to create safe and healthy communities in Los Angeles is achieved through sustainable approaches in community policing, and that includes embracing new technologies. Patrol vehicles are a police officer’s office, and we expect them to not only be economically and environmentally efficient, but also an effective tool for fighting crime in major metropolitan areas.”

The new Responder is powered by a 2.0-liter engine with an electric motor that runs on an advanced lithium-ion battery. The car will run on battery power up to 60 MPH and then the engine will kick in to provide added power for higher speeds.

Ford says the new Responder can be ordered this spring and will be delivered next summer. They are not releasing pricing.

Ford recently announced plans to boost electrification of vehicles in the Chinese market. Ford says that by 2025, 70 percent of the vehicles it sells in China will be electrified.