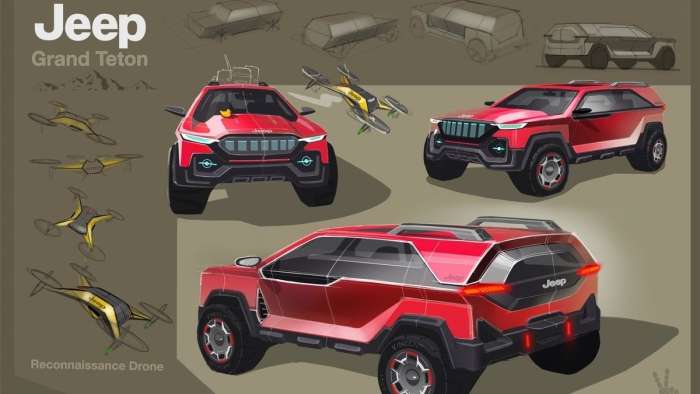 Could This Be a Future Electrified Jeep?

Jeep just announced the winners of its Drive for Design contest. Why one winner is showing particular determination!
Advertisement

Electric and electrified vehicles are all the buzz right now, especially with the unveiling of new electric pickup trucks and the 2021 Jeep Wrangler 4xe plug-in hybrid Jeep. Now, we are seeing what may be the future of electrified Jeeps. Jeep has announced the winners of the Ninth Annual Stellantis Drive for Design contest and the artists show true promise in the field of automotive design.

The winning design is for a Jeep called the Grand Teton. The electric Jeep appears to come with its own reconnaissance drone. The futuristic looking vehicle incorporates the traditional Jeep grille but adds slim headlights and fog lights. The wide oversized tires look like they will definitely handle off-roading.

The winning artist is Vincent Piaskowski, a 12th grader from Michigan. Piaskowski has competed in the design contest before and took home the prize for second place last year. Piaskowski shows incredible determination. He competed and won for third place two years ago.

“What’s exciting about this competition now is that we’re seeing previous students enter, but with notable improvements from the previous years,” said Mark Trostle, Head of Ram Truck and Mopar Exterior Design for Stellantis. “Students are digging deep and focusing their attention not only on the details, but the thought process of automotive design. It’s encouraging and exciting to see young artists take this competition seriously.”

The students were given ten weeks to design a future electrified Jeep for the contest. Trostle founded the contest in 2013 to encourage students to pursue automotive design. The contest is open to students nationwide. The submissions are reviewed and judged by members of the Stellantis North America design team. 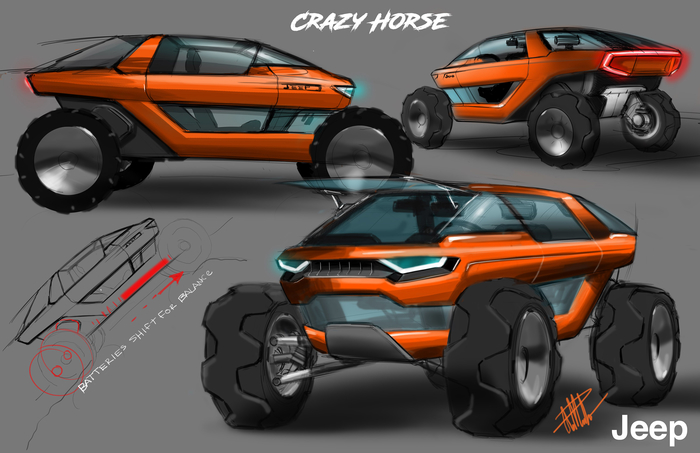 The second-place winning design is for a vehicle called Crazy Horse. Designed by Rocco Morales, a 10th grader from Michigan, this electric Jeep includes massive tires and incorporates glass on the lower part of the vehicle. Morales has a fascinating suggestion with his design, that the batteries should be able to shift in the lower chassis of the Jeep to balance the vehicle. Morales’ Jeep also has a windshield that can open. 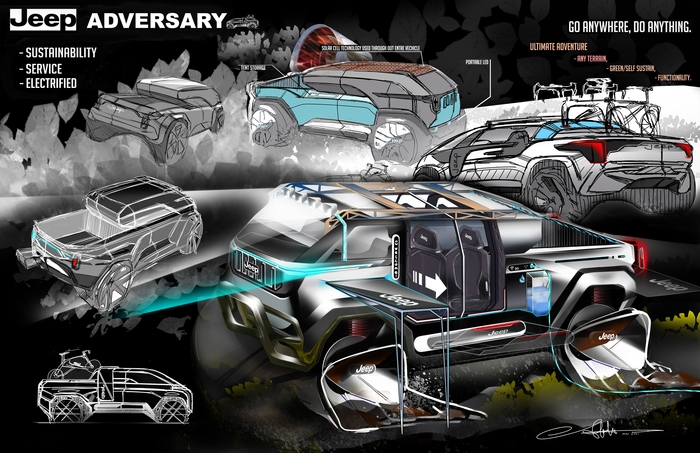 The third-place winning design comes from Alex Wang, a 12th grader from California. His electric Jeep is called the Adversary and shows a pickup type vehicle that can also have a removable solar cell cap. The sketch says that the solar cell technology would be used through out the vehicle. It also shows a portable LED light built into the rear panel. Tent storage would be built into vehicle that includes the catchphrase: Go Anywhere, Do Anything.

Trostle does not say if any of the winning designs or ideas will be used in future Jeeps.
“Since the contest began, we’ve been able to help young artists establish a career path in automotive design,” said Trostle. “We’ve employed previous contestants as summer interns and today one of our former winners is working in the Ram Truck interior design studio. It’s rewarding to our team to be able make an impact on someone’s career.”

This year’s prizes include one-on-one mentoring time with leading designers at the Stellantis Design Studios and a scholarship to attend the College for Creative Studies virtual summer design program. CCS is known for its incredible automotive design program. The winning designer receives a Wacom MobileStudio Pro 16 computer. The second and third place winners receive an Apple iPad Pro and Apple Pencil.