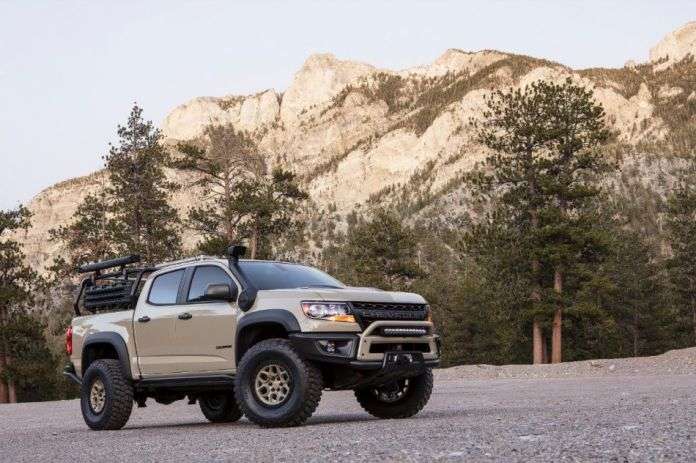 Chevrolet is showing a tricked-out version of its 2018 Colorado ZR2, in Las Vegas, that is designed for off-roading. Can a production version be far behind?
Advertisement

Chevrolet is using the Specialty Equipment Manufacturers Association meeting, in Las Vegas, to show off a beefed up version of its 2018 Chevrolet Colorado ZR2 pickup truck. Called the Colorado ZR2 AEV, this concept version is all about off-roading. The concept was created along with legendary off-road customizers American Expedition Vehicles. It uses the 2.8L Duramax turbo-diesel engine.

Jim Campbell, who heads truck strategy, performance vehicles and motorsports for Chevrolet says in a statement, “Some customers want even greater capability, and the ZR2 AEV concept and ZR2 Race Development Truck showcase the efforts we’ve made to explore how owners can get even more from their trucks.”

“ZR2 puts an exclamation point on Chevy’s off-road engineering ability,” said AEV founder Dave Harriton. “Our collaboration taught us that Colorado makes a great platform for building an off-road truck that can take you as far out as you want to go, safely.”

Meeting the competition head on

The big news though is the Colorado ZR2 AEV, which appears to be aimed squarely at competing with the Ford Raptor and the long-rumored Ford Ranger Raptor version. Ford is bringing the midsize Ranger back next year and talk is that there will be a beefier Raptor version that will improve the pickup’s off-road capability. The big dog already in the midsize market is the Toyota Tacoma, which features a special TRD Off-Road version.

It is important to note that Chevrolet refers to the Colorado ZR2 AEV as a concept, but rarely does an auto company put this much work into a vehicle that isn’t destined for the dealerships. You can expect to either see a special model of the Colorado truck with many of these features or a special performance package that includes these features.

As Jim Campbell says, “The Colorado can play any way you want. The work with AEV and Hall Racing acknowledges the strengths of our midsize platform, with both SEMA entries showcasing the versatility that’s already made Colorado a resounding success.”

According to Chevrolet, the Colorado celebrates its three-year anniversary this month, with more than 250,000 sales in 36 months.