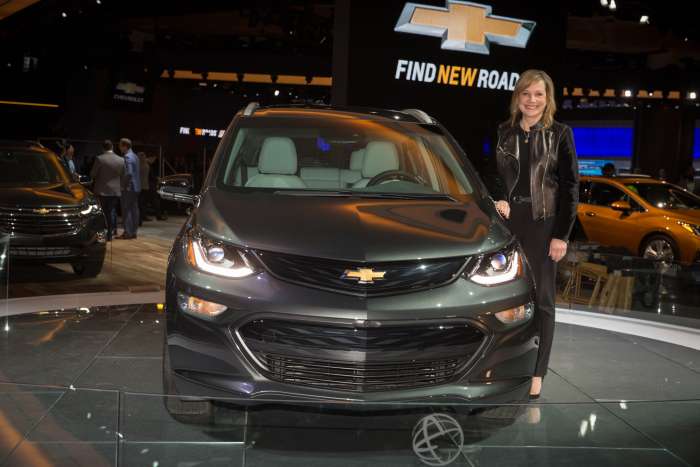 The 2017 Chevrolet Bolt EV wins yet another award. The Bolt EV wins Car of the Year at the North American International Auto Show, in Detroit.
Advertisement

Mark Reuss, the head of GM’s Global Product Development, said in a statement, “The Bolt EV fulfills Chevrolet’s promise to offer an affordable, long-range electric. It is a game-changer that is not only a great electric vehicle; it’s a great vehicle — period.”

The Chevrolet Bolt EV is rated to get 238 miles per charge. It stickers at $37,495, before federal tax incentives of up to $7,500, making it relatively affordable for a longer range electric vehicle.
Chevrolet has already started delivering the first Bolt EVs, in California and Oregon. Deliveries should start in New York, Massachusetts and Virginia this winter. The 2017 Chevrolet Bolt EV should be more widely available by next summer.

Chevrolet is also producing a fleet of Bolt EVs to be tested as self-driving or autonomous vehicles. The self-driving Bolt EVs are already visible testing on the streets around metro Detroit.

The big question is “Will it be enough to beat the Tesla?” The Tesla Model 3 has been shrouded in secrecy since the company took thousands of dollars in deposits from buyers who are anxious to drive a more affordable electric. The Model 3 is supposed to go on sale in late 2017 as a 2018. When it was advertised, the Model 3 was projected to get 215 miles per charge and sell for $35,000. Few believe that Tesla will meet that target date, because the company notoriously runs late.

Tesla already has a vehicle that gets more than 200 miles per charge. The Model S can get 215 miles between charges, but it starts at a whopping $66,000. Other models are rated to go further but they are way more expensive, closer to four times the cost of the Bolt. No word on if the Nissan Leaf pure electric is planning a version in the 200 mile range, the current model is rated around 74 miles between charges.

The Tesla 3 promises a more luxurious design, but how long are buyers willing to wait? Thousands have already made deposits, It is likely that people who made Tesla down payments will be upsold to an available Tesla model, if the Tesla 3 doesn’t make its promised manufacturing dates.

The 2017 Chevrolet Bolt EV is one of the most lauded vehicles in automotive history. Let’s hope that the accolades translate to sales.