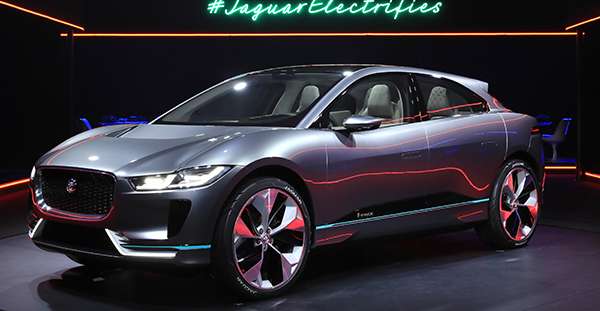 A number of luxury manufacturers are busy working on developing electric vehicles, partly due to the success Tesla is expercing. Last night in Los Angeles, Jaguar introduced their vision for an electric vehicle.
Advertisement

This is the I-Pace concept and it previews an electric crossover that will be going on sale in 2018.

The big story is underneath the I-Pace's sleek sheetmetal. This concept isn't riding on the same platform as the F-Pace crossover. Instead, the I-Pace debuts a new dedicated electric vehicle architecture which the automaker says allows their designers and enginners to rip apart the rules on vehicle layout. For example, the 90 kWh lithium-ion battery pack resides underneath the floor of the cabin. This allowed designers to maximze interior space. Open the rear tailgate and you'll find a flat load area offering 18.7 cubic feet of space.

The battery pack offers a maximum range of 220 miles. While that's under the 250 mile range of the Model X - the model that the I-Pace will be compared to - the 220 mile range is nothing to complain about.

Power comes from two electric motors, one mounted in each axle with 200 horsepower and 258 pound-feet of torque. Total output stands at 400 hp and 516 lb-ft of torque. Jaguar says the I-Pace can hit 60 mph in 4 seconds.

Back to the sheetmetal. Jaguar's designers pulled a number of cues from the C-X75 supercar concept from 2010 such as heavily sculpted hood and raked windshield. The lack of an engine and transmission also allowed Jaguar designers to employ cab-forward design, allowing them to increase interior space and shorten the front and rear overhangs. At certain angles, the I-Pace looks like a crossover. At others, it looks like a hatchback.

The interior looks concept-esq with slim seats and a large number of screens. But there are certain details that will likely make into the production model such as steering wheel with new touch-style switches. A panaromic sunroof increases the overall feeling of space.

Jaguar is taking reservations for the production I-Pace online, something that Tesla has been doing for awhile.

The production version of the I-Pace concept will debut an auto show sometime next year.