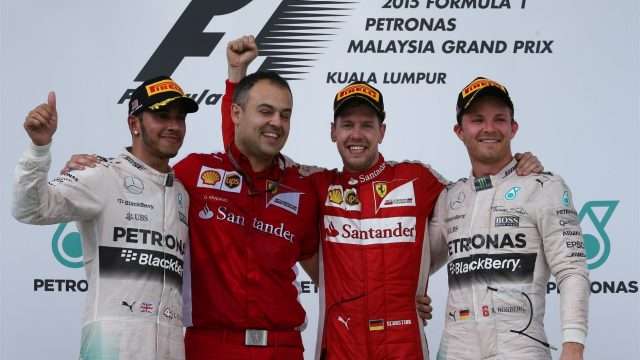 Mercedes AMG Is In For A Fight With Ferrari In 2015

2014 proved to be a banner year for Mercedes AMG Petronas, but 2015 is shaping up much differently. Only two races into the 2015 season, Scuderia Ferrari look like contenders.
Advertisement

Sunday’s Malaysian Grand Prix provided an interesting perspective on what Formula One fans can expect throughout the 2015 season. Sebastian Vettel proved that Scuderia Ferrari might be serious contenders for both the driver and constructors championships, having taken the top honors when the checkered flag flew. While the long season is just beginning, Vettel finds himself just 3 points behind Lewis Hamilton in the championship point’s battle.

After Mercedes AMG Petronas dominated the 2014 season and Hamilton procured the championship, his only competition being his Mercedes AMG teammate, it looked like a similar script would prevail in 2015 after Hamilton and Rosberg took a 1-2 finish in the opening race in Australia. The second stop for Formula One in Malaysia, however, demonstrated that Maranello has come to the table with a much improved setup from last season, their worst in 21 years.

What made the case for Scuderia Ferrari even more convincing, other than Vettel’s victory, was the drive put in by Kimi Raikkonen. Raikkonen and his Ferrari started 11th on the grid and looked to be out of contention early when he punctured a tire on the first lap. He spent the rest of the race playing catch up, but showed tremendous pace throughout the contest and finished just off the podium in fourth place.

The Malaysian Grand Prix has surely made Mercedes AMG stand up and take notice according to the team boss and former Formula One champion Niki Lauda, “Normally in sport when these things happen, and you don't win every race, the bell rings. The bell will ring loud because we all will hear it and we'll react to it, which is normal. But nevertheless we're second and third, we won the last race, so the world is not finished yet after one Vettel victory. But nevertheless they were better today.”

The Formula One series continues in Shanghai on April 12th with the Chinese Grand Prix. If it is anything like Malaysia, Formula One fans are in for a treat, something that should make the Formula One CEO, Bernie Ecclestone very happy.