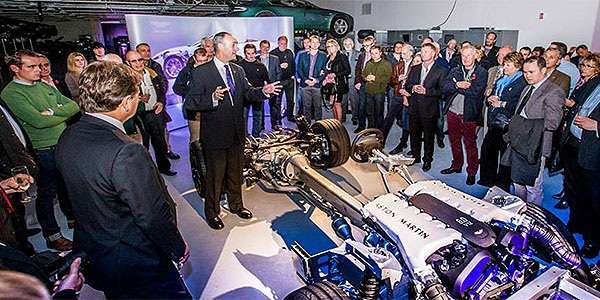 Aston Martin Hits the Road in the Ultimate Evolution Tour

A busy year for Aston Martin with new partnerships formed with Mercedes and AMG, Aston Martin is launching its Production line-up into the future with new innovations and technologies. With the goal in mind to ensure the brand maintains its beloved British heritage, while partnering up in new business relationships to further enhance the brand, Martin will maintain its independence as the successful brand we have all come to love and know.
Advertisement

Further promoting the brand, recently Aston announced the launch of the Ultimate Evolution Tour, in which the automaker will showcase Aston Martin designs and technical developments of 2014 and will offer their guests an exclusive insight into some of the innovations released by Aston Martin in 2014. The tour will travel around the United Kingdom to its dealership network hosting several exhibitions that will display the brand.

Also taking the British automaker into the virtual reality realm, Aston has created a hashtag for fans to snap photos of the tour’s trucks and post them to Instagram and Twitter. This digital and physical tour will raise awareness of the new vehicles in Aston Martin’s line-up and highlight the innovation of the brand in 2014.

“The car is the star,” he said. “That is rare in the branding and the marketing world. You have a purity of the brand, they are making a statement that the brand is valuable on its own, by doing that they are giving credibility, ‘We don’t need celebrities, hear the brand.’”

Some of the highlights of the tour will include the only full-size model of the DP-100 which is a futuristic virtual concept designed for the video game Gran Turismo 6, the Vantage N430 road and race cars, and the rolling chassis for the 2015 Rapide S and Vanquish. Aston Martin’s attendees at the Ultimate Evolution Tour events will also be able to drive the DP-100 in GT6 stations at the dealerships, and also check out the latest Aston Martin line-up on the showroom floors. With the events already fully booked, fans, enthusiasts and owners can follow the events on social media sites using the #UltimateEvo. What do you think of Aston Martin’s new partnerships with Mercedes and AMG ? Will the brand be able to maintain its British purity?