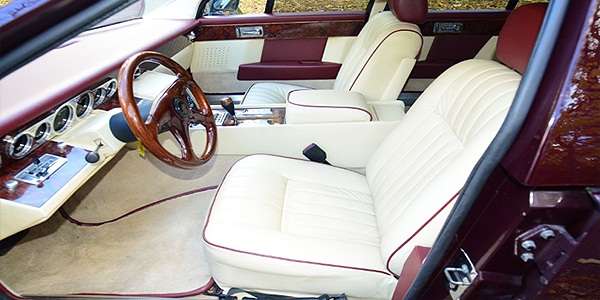 Evel Knievel taking things to the extreme on many levels in life did no less in his personally owned vehicles. Recently hitting the market and coming available for sale is a one of a kind 1984 Aston Martin Lagonda owned by the legendary stunt man himself, Evel Knievel. An amazing piece of history that has hit the market will soon reside in a new home.
Advertisement

Rolling off the assembly line in 1984, Knievel would not acquire this British born machine until the late 80s. Knievel would own his beloved Lagonda up until November of 2006, a year prior to his passing. Prior to his death he would sell the modified and customized 84’ Lagonda to his son Kelly Knievel for the price of a Ruth Chris dinner, for around $200, according to the bill of sale, which is included with the car upon purchase.

While the 1984 Aston Martin Lagonda is a bit unusual in appearance and may not be everyone’s cup of tea, it did however fancy Knievel’s eye back in the day. Favoring this “Dark Blood Maroon” hued ride as his choice of purchase, Knievel not quite happy with it in stock form, decided to upgrade the original 5.3-liter V8 motor to a 8.2-liter Chevy big-block V8 power plant that is estimated to produce somewhere in the neighborhood of 500 horsepower. Supported by a 700R automatic transmission currently on the clock is only 10,110 miles.

A generally flashy personality, Knievel tended to garner attention in all he did. Living up to this reputation and refusing to accept the sound of silence, he had the now 8.2-liter Chevy big block powered Aston Martin fitted with Chrome Laker side pipes to ensure the Evel Knievel soundtrack would be heard on any given day by the passerby.

Also included in the sale of the 1984 Aston Martin Lagonda is the personal trailer that Knievel would use to sleep in when traveling around the United States as a painter after retiring from his stunt career. Other unique personal items the new owner will receive upon purchase include a ream of paper and a personal bag owned by Knievel that contains a pair of gloves and a bottle of cologne as well that he often carried with him on his travels.

With bidding commencing at a healthy $109,000, this celebrity ride is currently in the hands of St Louis, Missouri dealer Moto Exotica and is listed on Ebay with six days left to bid. With the clock ticking and time closing in we expect this Knievel owned ride to fetch some pretty competitive offers. What would you pay for this piece of Evel Knievel history?