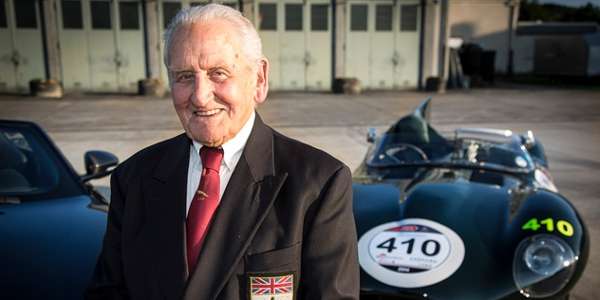 One of Jaguar’s legends is honored

Jaguar Test driver, Development engineer, and Ambassador is honored with an Award. Norman Dewis received the award as a tribute to the more than 70 years of automotive involvement.
Advertisement

Dewis, now 94 years old has been named an Officer of the Order of the British Empire (OBE) for his “services to the motor industry”. Although his work today primarily is that of an ambassador to the Jaguar brand, he is a legend in the British automotive world. He was involved in the testing and development of numerous iconic Jaguars like the E-Type, D-Type, and XK models. From 1952 to 1985 Dewis was the chief test and development engineer for Jaguar. He’s no stranger behind the wheel either; in 1953 he set the high mark for a production car speed with a record of 172.4 mph in an XK120. A three-time Le Mans race driver, he helped win the 1955 24 Hour race in the large valve and long nose D-Type.

His early career began where he served as a rear gunner during World War II with the Royal Air Force (RAF). He was also known for his work during the early development of disc brakes on car in the 1930’s. It would seem that Dewis has been involved with automobiles his whole life, so it is quite fitting that he is being honored.

Just because Dewis is 94, don’t think for minute that he is ready to retire; he is currently working on some of Jaguars latest projects. This includes his involvement in the Jaguar Land Rover Special Operations Heritage Business organization and is also supporting the opening of the new Heritage workshop at Browns Lane. Doesn’t sound like retirement to me! This is a man whose long and storied career began at Jaguar with the most amazing job. His first job was to ride along with Sterling Moss in the 1,000 mile Italian Classic Mille Miglia. He also took the first test drive in the E1A, the E-Type research car on June 13, 1957. Dewis again made a first run in the historic “Competition E-Type” also known as E2A on Feb. 29, 1960.

Of all the famous and historic Jaguars he has driven, when asked what is his favorite he answered “Ha! I get asked that all the time, of course. I think the E-Type was one of the best we ever made, but as far as personal feeling goes, the 1955 D-Type – the one I drove a Le Mans – is one I feel a real attachment to.”
How does Dewis feel about this prestigious award he is being honored with? “Oh I’m delighted, it was a big surprise and I’m very honored to receive it. It’s a very personal thing and I feel it’s a bonus”.

Among others paying tribute to Dewis, John Edwards, Managing Director of Jaguar Land Rover Special Operations said: “Jaguar owes a huge debt to Norman Dewis. His incredible skills have resulted in some of the finest cars this company has ever made – he is today the same quietly confident and modest man of the 1950’s, he remains a world-class Jaguar ambassador. It is fantastic to see his contribution to Jaguar, and to British engineering recognized.”

Tesla Contemplates A New Strategy for China Retail even As Sales Boom
Jay Leno on Elon Musk & EVs: “I Think He Should Get ... Credit"
END_OF_DOCUMENT_TOKEN_TO_BE_REPLACED