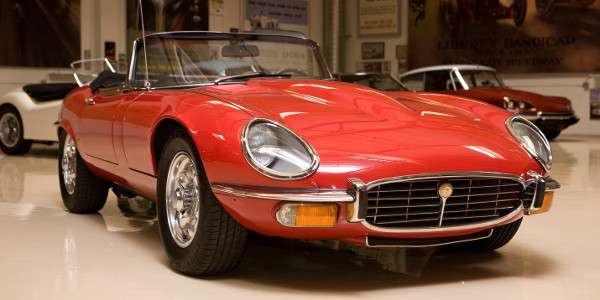 Jaguar is one of Jay’s favorite brands, but which one of his famous XKE’s will be his favorite? The red drop top XKE appears stock but is about heavily modified as a Jaguar can be!
Advertisement

The first thing most loyal Jaguar fans will notice is the size of this car, it’s smaller than the standard 1963 XKE’s. Jay points out they never built a short wheel based V12 roadster but his has some interesting modifications that give it a unique stance and enough power to wake the neighbors.

The man responsible for the tasteful mods to Jay’s red XKE is none other than Jason Len (owner of XK’s Unlimited). The car was actually Jason’s until Jay convinced him to sell it. Jason explains that the V6 version of this car was built on the shorter wheel base and was a quick and nimble car to drive, but the V12 was only available in the longer nosed vehicle. Jason made the gutsy decision to combine the two and modify this cat into a short wheel based V12 Roadster. It seems this is a vehicle that Jaguar should have built by mating the original styling and the performance engine option into one sexy little roadster.

Jason started off with a 2+2 Coupe and after cutting the top off and the car in half, he shortened the chassis approximately 9 inches, then using a Series 1 rear tub he began to graft the two together. The product is one sleek and slender little roadster with the look of a V6 Series 1 car but with the growl of the larger V12 lurking under the hood.

I guess you can say that as Jaguar enthusiasts visit Jay’s garage they are always stumped by this one because they can’t quite figure it out. The entire rear end of this car is stock Series 1, however they did flair the rear fenders to match the looks and styling of the V12 cars (with subtle trim changes). The front of this car is also a bit altered to the trained eye including the trim work and enclosed headlights like found on a Series 1 (non V12 cars). Len goes on to explain that some of the hardest parts of the conversion took months to complete and could only be done. The doors and the top proved to be a challenge because the originals did not line up correctly after the front and rear were put together.

This unique car also has upgrades to the suspension and handling including heavy duty sway bars and Wilwood brakes. The custom 5.7 liter V12 engine was heavily massaged with massive Webber carbs sitting on top and the custom hand built stainless headers are attached to a custom big bore exhaust system to give it that distinctive V12 note. The horsepower is estimated to be close to 400 and that works just right mated to the new 5 speed transmission.

The stance of Jay’s incredible looking XKE drop top roadster is so striking that at first glance you might think its unmodified and stock, but don’t be fooled, this big cat is ready to roar! I’m not sure which is Jay’s favorite, but I think after one look at this beauty, I’m ready to say my all-time favorite Jaguar would be this modified red XKE with the V12 because it has the distinctive looks and the ground shaking performance to back it up!

Tesla Contemplates A New Strategy for China Retail even As Sales Boom
Jay Leno on Elon Musk & EVs: “I Think He Should Get ... Credit"
END_OF_DOCUMENT_TOKEN_TO_BE_REPLACED