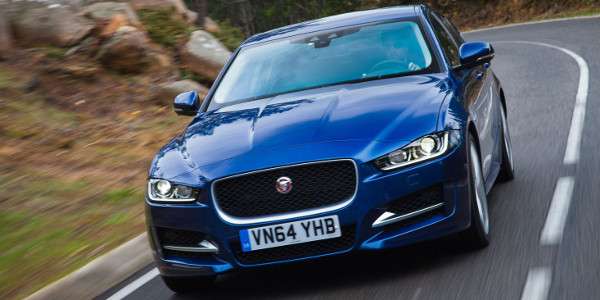 What do flying in a glider with a world champion and aerodynamics of Jaguar’s all-new XE Sedan have in common? You will be surprised just how much you can learn while flying in an un-powered aircraft.
Advertisement

Jaguar’s Wayne Burgess (Studio Director-Jaguar Design) takes flight with Sarah Kelman (Gliding World Champion) as they discuss the aerodynamic characteristics of her glider and of the all-new XE Sedan that is scheduled to launch soon.

The video showcases the flight as well as the topics of power to weight and the lift to drag ratios, also how the lightweight materials chosen can and will make a difference in the aerodynamics. Burgess says the XE is the most aerodynamic vehicle they have ever produced.

Watch as they take fight twice:

I’ve never flown in a glider but the look on Burgess’s face tells the story of the speeds and the G-Forces he experienced during the flight. He used the word intense when Sarah asked if he was okay, and intensity is just what the brand needs to stay ahead of the completion in today’s market. The all-new XE will change the way we think about a compact luxury performance car.

Sir William Lyons (Jaguar Founder) once said “The car is the closest thing we will ever create to something that is alive”. Today Jaguar carries that same drive to perform and the innovation to overcome the monotony of everyday driving. They want your driving experience in a modern day Jaguar to go beyond any experience you have had recently. They have fine-tuned their cars to deliver the proper amount of ground pounding performance and superior handling that will leave you feeling like you have taken flight, but on the ground.

Jaguar’s uncompromising ability to build luxury vehicles with a perfect combination of elegance and power is not found in many other cars on the road today and I feel like they have just scratched the surface of what they are capable of in the very near future!

The world-class craftsman can be found in only a few cars today, but Jaguar has made it their lifelong commitment to keep pushing the envelope of technology, innovation, performance and luxury. They do this all while packaged into one great car. It’s amazing at the heights Jaguar and their team will go to ensure that they have explored every angle to maximize the aerodynamics of the XE.

Just to return the favor for the glider flight, Burgess let’s Sarah experience a test drive in the XE. The discussion immediately migrates toward the common use of high-strength/lightweight aluminum in both the glider as well as the XE’s construction. Clearly from the smiles on both their faces, the experience on the ground in the XE was just as exhilarating as the flight. I’m ready for my test drive now!