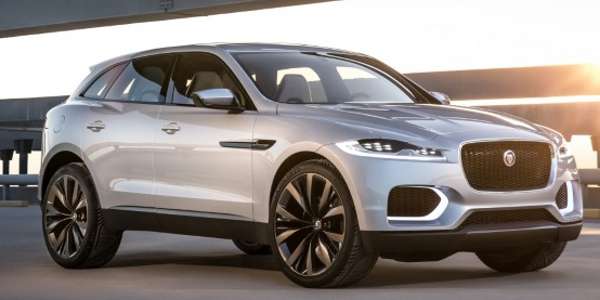 Let’s examine the all-new crossover from Jaguar and dig deeper into this new high-tech family vehicle that will also pack a hefty performance punch. It’s going to be a hit!
Advertisement

So Jaguar announces they will add a crossover vehicle to their lineup as a 2017 model. This crossover is based on the C-X17 Concept unveiled at the Frankfurt Motor Show in 2013. Please don’t call it an SUV, they want to call it a “Performance Crossover”. Jaguar says we may see it at the New York Auto Show in April, although Jaguar says the F-Pace will actually be manufactured in Solihull, UK.

If Jaguar is looking to sell more vehicles, releasing an all-new model into a high-volume segment like the crossover world is a great first move. But releasing it and attracting buyers to consider it are two worlds apart, so what will Jaguar’s new F-Pace Performance Crossover offer as bait to get buyer to hit on it? They can start buy offering best-in-class cabin space, iconic Jaguar styling, new stronger/lightweight aluminum chassis, and boat load of innovative technology and safety features. It also must have the luxury-filled interior that Jaguar owners expect with plush leathers and wood grain trim. Oh yeah, and it needs to be fuel efficient.

Before we dive into the features, let’s see the hard-nosed competition that the F-Pace will go into battle with: the Audi Q5, BMW X3, Lexus RX-350, and its own brother the Land Rover/Range Rover Evoque. That’s a wide but established group of award winning SUV’s, but keep in mind Jaguar wants their vehicle to be a sexy, stylish, family friendly, but sporty crossover even dad’s will enjoy driving.

Sources say to look for a 2.0 liter turbocharged four-cylinder base engine and the 3.0 liter supercharged
V6 as options for the power plant. Also expect the 8-speed auto transmission in the all-wheel drive version to be equipped with the advanced all-surface Progress Control giving the most innovative slippery conditions/traction control system in the class.

Consumers will not have too much longer to wait for this new crossover; Jaguar says the F-pace will go on sale as soon as 2016. But we will have to be patient because Jaguar has not released pricing yet; however some are speculating the F-Pace to come in around the $40,000 range, depending on the options.

I say forget about the funny name and give this performance crossover a look and find out if Jaguar will bring the sophisticated style and iconic British luxury into a whole new world with the F-Pace.