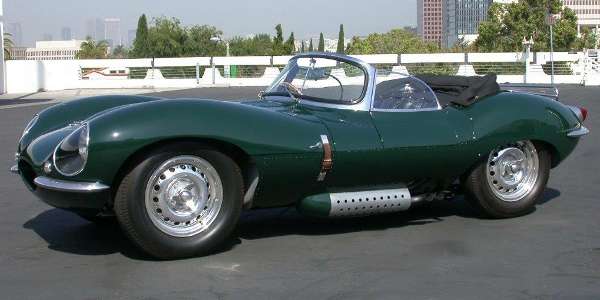 The Jaguar XKSS was a D-Type racer with enough modifications to make it street legal (barely) – and only 16 XKSS car were ever made. It’s a car that was cool enough for Steve McQueen.
Advertisement

Let’s face it, Steve McQueen was the poster child for Cool, the guys wanted to be him and the girls wanted to be seen with him. He was an American actor that got all the tough guy parts in movies, he drove the cool cars of the day, and was even involved in racing cars in real life. Riding motorcycles, driving fast cars, and exploring the limits of speed were just the ways he was wired. If it was fast and a thrill to drive, he owned one.

Jay Leno’s Garage recently got an opportunity to get a in-depth look at Steve McQueen’s 1956 Jaguar XKSS and it’s worth a look:

After watching Jay’s experiences in many rare and exotic sports cars, I’m not sure I have ever seen him this excited after driving a car.

The “Green Rat” is what McQueen called his car and the 3.4 liter (inline six cylinders) engine was rated at 250 horsepower, so this Rat would scat! The engine was bolted to a fully synchronized four-speed manual transmission and the reported zero to 60 mph was just a tick over 5 seconds as it approached its top speed of 149 mph. And the car was also equipped with disc brakes and rack and pinion steering – pretty modern for sports car in 1956. Made mostly of aluminum, this car is incredible light and thanks to its aerodynamic body the Jaguar D-Type was rumored to have run almost 180 mph down the Mulsanne Straight at Le Mans.

Although McQueen sold this car in 1969 he had so much regret that he bought it back in 1977 and kept it until his untimely death in 1980. The custom touches that he put on the car were very tasteful, such as the leather crafted interior by Tony Nancy and the Von Dutch custom glove box door. The Jaguar had originally been white with a red interior, but McQueen painted it British Racing Green and installed a black interior. With triple Webers and a 6,000 rpm redline, this British beast would have been hard to go unnoticed, even if your weren’t Steve McQueen.

Celebrity owned cars always fetch a premium, but when that star is Steve McQueen it just seems to add zeros to the price. McQueen’s 1963 Ferrari 250 GT sold in 2011 by Christie’s Auction house brought $2.3 Million which is approximately five times the normal estimated value of one of those cars. His on screen persona caused fans to love him and want to drive the cars he owned. When you factor in the rarity of this Jaguar XKSS being only 16 built and that it was derived from the Le Mans winning D-Type race cars, it’s no wonder that the McQueen factor makes it almost priceless. Just to add in the cool factor, legend has it McQueen amassed numerous speeding tickets in this car and even had his license suspended twice. I’m quite sure that Steve never had bumper stickers on any of his vehicles, but if he did it should have read “I’d rather be driving my XKSS”.

This spectacular and ultra-rare car was on display at the Peterson Museum in Los Angeles, CA as part of a Jaguar Sports Car Exhibit from 2013 to 2014. And as seen in the video, it is seen a few times at auto shows and special car events.