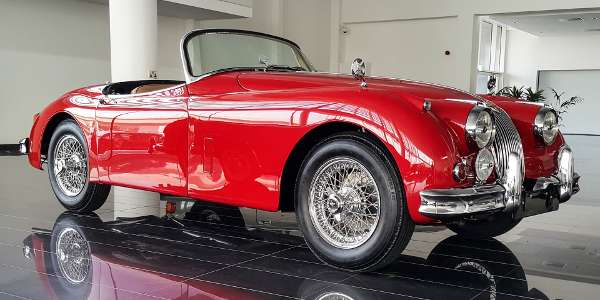 Jaguar built the XK150 from 1957 to 1961 and it was a radical change in style for the times. The XK150 was equipped with a standard feature that would set the standard for all sports cars!
Advertisement

European Sports cars in the late 50’s and early 60’s were just not that exciting, but Aston Martin, Ferrari, and the Mercedes Benz did add some stiff competition. But the XK150 held its own and was ready to take on the world.

A Jaguar series production car first, 4 wheel disc brakes were offered as standard equipment on the 1960 XK150. It also had a noticeable wider stance and more precise grille, but the car was highly recognized as pure Jaguar. It had however; lost the swoopy look of the earlier XK’s and was offered in convertible and fixed head coupe. The gorgeous twin-cam, straight-six still graced the engine bay of this sexy car and most say is almost as attractive as the car itself! The XK150 was rated at 190 horsepower standard and also offered in the 210 horsepower SE version. And if that was not enough grunt for your appetite, then you might want to opt for the S version (3.4 liter) that came with triple SU carbs and capable of generating 250 horsepower. But to top out in 1960, the 3.4 liter engine was bored out to 3.8 liters and maxed at 265 horsepower and could scamper from zero to 60 mph in just over 7.0 seconds and reportedly could top 135 mph!

This car was built on the heels of the iconic E-Type that would be released in 1961 and quickly become one of the most beautiful cars in the world. So I have to ask the question, did the E-Type steal some of this cars glory? Maybe Jaguar fans were so focused on the new flagship that they forgot to give this car the attention it deserved. The numbers say that Jaguar was able to sell just over 9,300 of the XK150’s and for a car that cost almost $5000 at the time, that’s not too shabby.

Hagerty says the average cost of the XK150 (2 door) fixed head coupe is only $43,912 but the mighty XK150 S Roadster is fetching an average price of just over $129,000. The trends on almost every version of the 1960 XK150 is on the upswing, but it still may be the time to buy one if you are in the market. Just for comparison, let’s look at the closest German and Italian examples; (the following estimated average values are from Hagerty.com)

If you can find a great example of a clean XK150, the Jaguar might be a bargain ready to be snatched up at a great price before it increases. If you study the clean lines and sexy contours of this classic Jaguar it should be a great way to get into the British Sports Car game and cruise the back roads.

Tesla Contemplates A New Strategy for China Retail even As Sales Boom
Jay Leno on Elon Musk & EVs: “I Think He Should Get ... Credit"
END_OF_DOCUMENT_TOKEN_TO_BE_REPLACED