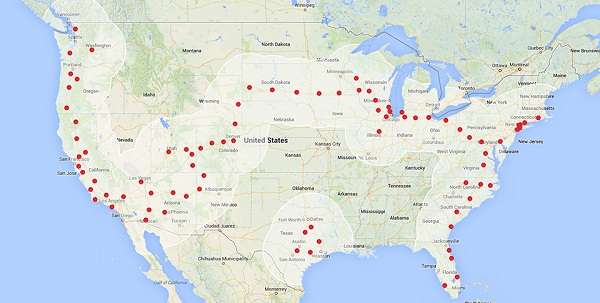 Norman Hajjar is more than halfway through the “Epic Electric American Road Trip” in his all-electric Tesla Model S. His journey will take him to all four corners of the United States without using a drop of gasoline. Here’s why what he is doing is so important.
Advertisement

A common argument against electric cars is their inability to travel long distances, due to a combination of insufficient battery capacity and lack of practical fast charging stations. Although owners of plug-in hybrids like the Chevrolet Volt, Cadillac ELR, Ford C-Max Energi, Ford Fusion Energi, Honda Accord Plug-in, Toyota Prius Plug-in and owners of similar upcoming models would scoff at this claim, it is largely valid for pure electric vehicles.

Not for the Tesla Model S, however. Norman Hajjar is a research director at Recargo, an EV software and information services company that makes a popular app called PlugShare that identifies charging locations. He owns a Tesla Model S and is setting a world record for longest distance driven on electricity; his 18-day trip will take him from the Pacific Northwest to Maine, then down the east coast to Florida, and finally back across the country to Los Angeles.

Oh, and did we mention Hajjar will not pay a dime to fuel his car for the entire 12,000-mile journey? He is using exclusively Tesla Supercharger stations, which allow him to recover 170 miles of range for free in less than 30 minutes. Tesla offers access to the Supercharger network (pictured above) as an option on the 60-kWh model, but it comes standard with the larger 85-kWh battery pack.

That Supercharger network is privately funded by Tesla and it is impressive. Currently boasting 84 stations along major interstates in the United States, the expansive network allowed a Tesla team to drive from coast to coast earlier this year. By the end of 2015, Tesla hopes to cover 98% of the U.S. with the high-powered stations.

Hajjar’s journey will go a long way toward proving that electric vehicles can do anything conventional vehicles can. Tesla offers significantly more charging infrastructure and battery capacity than its competitors, though, which is one of the reasons Hajjar hopes to illustrate the need for an improved public DC fast charging network to make such road trips possible for drivers that do not own a Tesla.

However, there is an argument that so-called “corridor charging” doesn’t make sense until pure electrics can achieve 200 miles on a charge. Imagine taking a Nissan Leaf from D.C. to Florida – it just doesn’t make sense, and is not what the vehicle was designed for. For the commuter cars that represent the majority of electric vehicles (including plug-in hybrids that can double as road trip vehicles) it makes more sense to invest in lower-cost workplace infrastructure.

The “Epic Electric American Road Trip” if anything highlights the brilliance of Tesla’s model. Once the company can begin churning out lower-cost vehicles, many more drivers will love the convenience of free fueling at the Supercharger network that by 2017 will be ubiquitous. The fact that Superchargers already do or will replenish energy at rates of 120 kW, more than double that of most public DC fast chargers, makes them even more practical for road trips. Tesla eventually plans to increase that number even more to further reduce charge times.

You can track Hajjar’s progress on this nifty live feed. As of Friday morning he was in Newark, Delaware and had logged over 6500 miles in 130 hours of driving time, charging with 29% renewable energy. If he were driving, say, a Honda Civic (quite a frugal car by most standards) by the end of the trip Hajjar would have paid about $1,000 in gasoline costs. Using a Tesla Model S with the Supercharger network, he will pay $0. Not a bad deal.