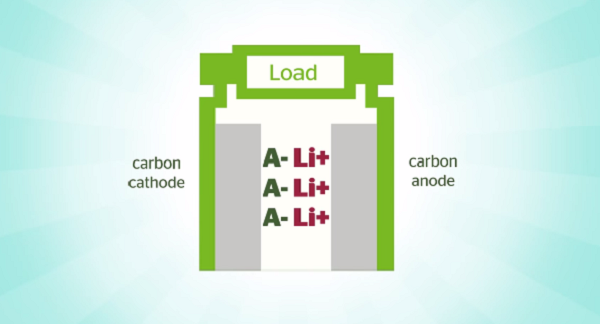 When it comes to announcements of revolutionary advances in battery technology, a cautiously optimistic approach is prudent. Development in the laboratory is a far cry from commercialization, and promising chemistries usually fail to achieve the necessary low-cost scalability to make it into production vehicles.

With that in mind, this week’s news from Power Japan Plus should be taken with a grain of salt. At a glance, though, their new Ryden dual-carbon battery cell looks very promising.

As Power Japan Plus CEO Dou Kani told Green Car Reports, dual-carbon batteries were first proposed in 1978 but have required decades of development to achieve reliability and low-cost mass production. Rather than a conventional lithium-ion cell with a carbon anode and a lithium metal oxide cathode that varies by chemistry, a dual-carbon cell has a carbon cathode as well as anode.

Power Japan Plus claims that its proprietary dual-carbon chemistry offers the same energy density as today’s lithium-ion cells, but with virtually none of the other shortcomings of lithium-ion. Longevity, safety, limits on charging rate, heavy or rare earth metals required for production, and recyclability all allegedly become far less problematic with the new chemistry.

The Ryden battery has been tested over 3,000 charge/discharge cycles with negligible capacity loss, long enough to eliminate battery longevity concerns in electric vehicles. It experiences very little temperature rise in charging and discharging, quelling worries about so-called thermal runaway and fires. It can be charged up to 20 times faster than lithium-ion, which would open the door for ultra-fast DC charging times.

Kani also revealed that the Ryden battery “can be 100 percent charged and discharged with no damage to the battery,” which would allow increased range without an increase in energy density by eliminating restrictions on depth of discharge window that automakers currently have to adhere to.

Not only that, it is claimed to be entirely recyclable, requires less life-cycle energy input and doesn’t contain the rare earth and heavy metals used in existing technologies.

With all of these tremendous advantages, is it possible to make this miraculous battery in large volumes at low cost? It appears that the tentative answer is yes; the use of carbon in place of metals such as cobalt, nickel, and manganese will in theory make it cheaper than existing battery chemistries. Kani also confirmed to Green Car Reports that the cell can be produced using essentially the same manufacturing processes that already exist but with only carbon as an input material.

Power Japan Plus says it will begin production of its Ryden cells in the “commodity cell” 18650 format, notably used in current Tesla battery packs, later this year for specialty markets. In August, the company will announce a partnership with a “well-known” company that will construct packs with battery management systems. If and when the technology makes it to electric vehicles, the company expects to license the technology to existing manufacturers.

It appears as though this technology is much further down the road to commercialization than other much-hyped announcements of revolutionary battery developments. CEO Kani called his Ryden cell “the energy storage breakthrough needed to bring green technology like electric vehicles to [the] mass market.”

Though it is early to get too excited, not to mention the new Ryden battery does not offer the all-important improvement in energy density, the good people at Power Japan Plus may just be onto something that could have a great impact on the EV market a few years down the road.

Parks McCants wrote on May 19, 2014 - 11:42am Permalink
The battery described may be a very viable solution for home P.V. cell generated D.C. storage and inversion. The downside to of off-the-grid solar integration has been the degenerative (10%) per year storage capacity of the deep-cell storage battery; and the sensitivity of the storage bank to external temperature swings. I like the idea of a battery that will recover 100% from a full discharge. As you say, we shall see. Thanks for the informative read.
Aaron Turpen wrote on May 20, 2014 - 6:07am Permalink
I won't hold my breath on this one. I suspect this company's announcement was more about gaining investors than getting anything to market soon.