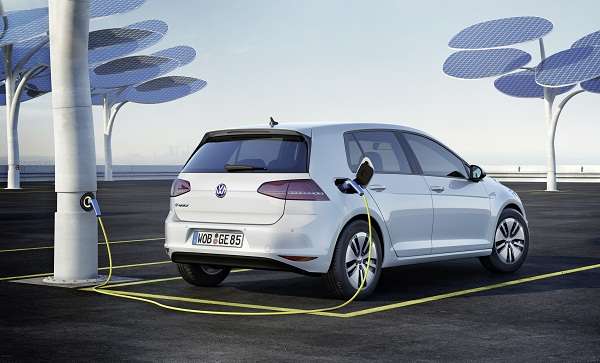 Volkswagen is testing a super-battery, but how should they use its powers?

The practicality of current electric vehicles on the market, with the exception of the Tesla Model S and its huge battery pack, is inhibited by the energy storage capability of lithium-ion batteries. Volkswagen is working on a new battery that could change the game entirely.
Advertisement

It is no secret that electric vehicle batteries are at an inherent disadvantage compared to the energy storage capabilities of gasoline. While 1 kilogram of gasoline holds about 43 MJ of energy, 1 kilogram of the average lithium-ion battery today holds about 150 Wh of energy, or just 0.54 MJ (although it should be noted that the 2014 Kia Soul EV can store 200 Wh/kg, and the Model S battery to be produced at the future Gigafactory is likely around that value if not higher).

This means that every unit weight of gasoline carries about 80x the energy of a battery. Therefore, to store the energy equivalent of a 15-gallon tank of gas, a typical lithium-ion battery would have to weigh about 7,000 pounds. Though electric vehicles are far more efficient than conventional vehicles and can recover energy through braking, to achieve the same range as a vehicle with a 15-gallon tank of gasoline an electric vehicle would still need a battery weighing in the neighborhood of 1,500 to 2,000 pounds.

Clearly, this is why electric vehicles can only achieve their current limited ranges. However, Volkswagen revealed this week that they are developing a new battery chemistry capable of more than tripling the energy density of their current lithium-ion battery found in the eGolf. Their initial estimate is an increase from 26.5 kWh to 80 kWh for the same size battery pack, meaning 3x the current range of the vehicle (which is estimated from 81 miles to 188 miles, but real-world range in the States will likely be around 100 miles).

The consensus, which VW board member Dr. Heinz-Jacob Neusser didn’t deny, is that this new battery uses lithium-air technology. Lithium-air has been a battery holy grail of sorts since the 1970s, but obstacles such as electrolyte degradation, manufacturability, and high cost have prevented the lithium-air takeover that would truly catapult electric vehicles into the mainstream.

Recently, improvements have been made to bring these batteries closer to reality; but if there is anything we have learned from following battery technology “breakthroughs” over the years it is not to get excited until at least the prototype stage, which VW has not even reached yet. Even after successful prototyping, new battery tech won’t see commercialization for several more years. So in this field, patience certainly is a virtue.

I would argue, however, that even achieving this phenomenal increase in energy density doesn’t mean we should automatically triple the range of every EV on the market. The biggest obstacle to market penetration for electric vehicles is not range anxiety, but high purchase price. The mass-market customers the industry badly needs think with their wallets first, and under solely that criteria most current EVs will be passed over. The eGolf will likely retail in the high $40,000 range – VW should use any improvements in battery technology to bring that cost down by using a smaller pack rather than increasing range with a pack of equivalent size.

However, the full debate can be saved for the day we know for sure that this super-battery will find its way into production vehicles.