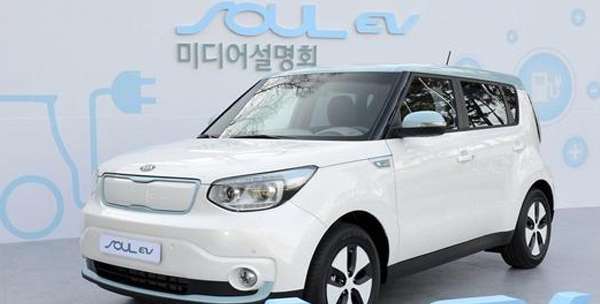 Kia Announces Pricing for Soul EV and It's High

At a press conference today in South Korea, Kia has announced pricing for its Soul electric vehicle that will go on sale as a 2016 model. It seems high for the U.S. market by about $10,000.
Advertisement

Kia will start building a battery-powered version of its Soul compact in Korea next month. The car will be Hyundai-Kia's first battery-powered EV export, with destinations including the United States and Europe, according to a Reuters report via Automotive News.

For this year, the global sales target is 5,000 Soul EVs, said Cho Yong-won, vice president of Kia's Domestic Marketing Group. In Korea, the price of the Soul EV will be 42 million won, which is about $39,400. That seems unrealistically high for the US market where a base Soul costs $14,900 in its most stripped down package but typically runs about $18,000.

The Soul EV uses a highly energy-dense lithium-ion polymer battery. Located beneath the floor, the 27kWh, air-cooled, 200 watt-hour/kg battery is expected to yield a range of approximately 80-100 miles of real-world driving on a full charge, with internal testing and evaluation results exceeding 100 miles in some instances. That's attainable on a fast charge of about 30 minutes and four hours on a slow charge.

Kia, 34 percent owned by Hyundai, has favored battery-powered cars because they can be charged at home as well as at charging stations. Fuel cell cars must be refilled with hydrogen only at filling stations, the Reuters article reported.

The Kia Soul EV is going to succeed in the United States if it comes in at a more realistic price. Expect it to do better if Kia pushes it at special leasing rates but not if comes in costing close to $39,000. That would put it well behind the Nissan Leaf, which has a starting MSRP of $28,890.

jstack6 wrote on March 11, 2014 - 12:05pm Permalink
A little high at $39,400.00 on the price but a World leading EV with more range than most except the Tesla. I think they will lower the cost just like the LEAF did and Focus EV until they see sales up to what they expect. The first PC's and cell phones were high and have continued to come down each year.
Aaron Turpen wrote on March 12, 2014 - 2:00pm Permalink
Dare to dream, but until batteries get a lot cheaper, it's not going to happen without trimming down that 200 this has. I really suspect that when/if this makes the U.S. market, it will just be a California compliance car sold in limited markets.
jstack6 wrote on March 12, 2014 - 10:04pm Permalink
I hate compliance cars. So far only Tesla and the Nissan LEAF are real electrics available to EVeryone.
Charles wrote on March 29, 2014 - 3:18pm Permalink
The car will probably be cheaper in the US then S Korea like other Kias. $39.4K is just the S Korea price converted to USD. While in S Korea i checked the price of my Sorento. It was the equivalent of $10K more.