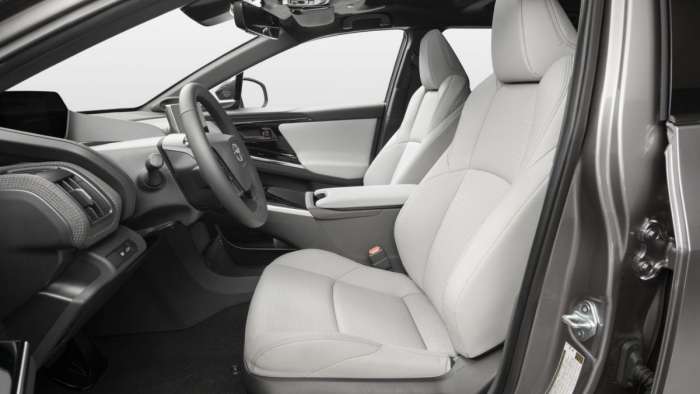 The 2023 Toyota bZ4X’s Interior is Far from Mundane

The more and more I look at the interiors of electric cars, I see a trend going. Either EV interiors are very minimalist like Tesla, or they go over the top with buttons and screens like Ford’s EVs. The 2023 Toyota bZ4X is a heavy “button loaded” leaning interior with a big screen, an array of buttons, high-set gauges, and many software features available for the 2023 Toyota bZ4X.

First, let’s take a look at the huge 12.3-inch multimedia infotainment screen located right in the middle of the dash. This screen has an almost bezel-less perimeter with most of the buttons on the bottom instead of the top or side. It reminds me a lot of the 2022 Toyota Tundra’s interior with a very short bezzled infotainment screen. The new 2023 Sequoia will also have a short bezzled screen sharing it with the Tundra. Yesterday we published an article giving more information on the 2023 Toyota bZ4X’s infotainment system. 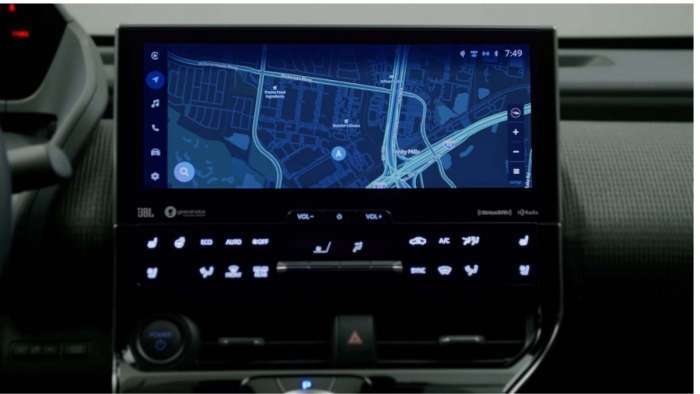 Moving on to the driver’s seat, the steering wheel looks a little dated in my opinion. I would’ve liked to see a little more futuristic details with the steering wheel. However, you get this pretty big digital gauge cluster that shows things like your speed, range, outside temperature, and time. The 2023 bZ4X doesn’t have a heads-up display but because of the high positioning of the gauge cluster, it almost feels like a mix between augmented and abated reality. The steering wheel has all your typical buttons such as the volume, track control for switching tunes, and driving modes.

The picture of the interior shown on Toyota’s press release features the white and black interior which I love. The white seats give it an almost seamless feel while the ambiance of the dash and trims give it a sense of luxury. Speaking of dash, most of the lower center console is in piano black which means even if you don’t touch it the trim will still get dusty.

The shifter on the 2023 Toyota bZ4X is a little circular selector that we are starting to see more and more of. I don’t really dislike the selector I just like the feeling of holding a shifter and putting it in gear myself instead of twisting a little selector. I guess it’s for convenience and in an electric car, it's not that necessary to have an actual shifter instead of a selector.

Right below the gear selector, there is a big undertray that you can use for storage for things like your phone, wallet, keys, or anything else really. There is also a wireless charging pad for your supporting smartphone. A lot of ports for charging or connectivity and I like how the little lid right below the gear selector has this cool design almost like a faded array. 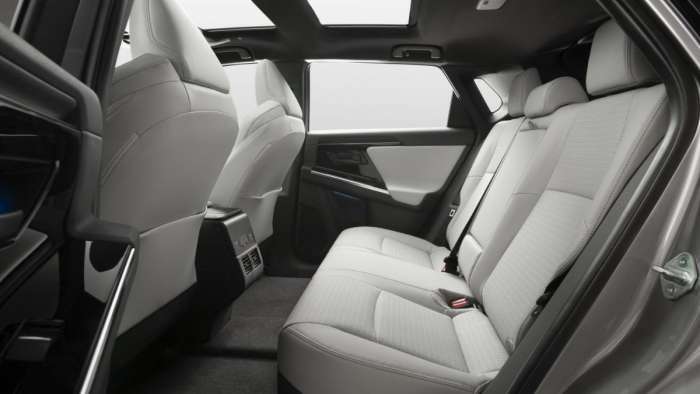 According to the pictures provided by Toyota, the back seats look roomy and comfortable given this is an SUV. Think of the 2023 bZ4X as a slighter larger RAV4. It is a little longer and wider than the RAV4 which gives it a little more legroom. There is AC and vents in the back so your kids or passengers can still stay comfortable. Also, for added visibility, there is a huge panoramic roof with a slight tint, so it doesn’t act as a huge sunroom to let all the sun in.

All in all, this futuristic EV SUV has a nice and elegant interior with comfort and Toyota’s UI seemingly mingling together. I like how they kept physical buttons and did not go digital with things like climate control or selecting your temperature. With the size being a little larger than a RAV4, I can expect it to be roomy.

What do you think? Did you like the 2023 Toyota bZ4X’s interior? Let us know in the comments section below.