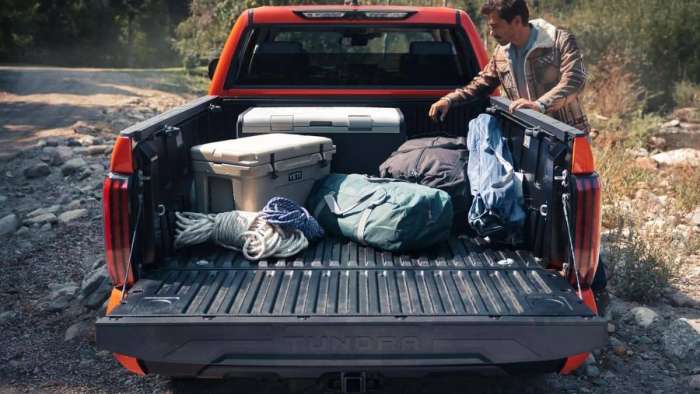 Owners of the new 2022 Toyota Tundra say they like the new drivetrain even though the voices of poorly built turbo wastegates keep reaching out.
Advertisement

When the production of the new Toyota Tundra began in 1999, it really showed just how great Toyota’s reliability, quality control, and extreme attention to detail was. For the next 21 years, Toyota proved that the Tundra was not just some other pickup. Rather, it was a pickup designed for the outdoors, getting your hands dirty, and drinking gas like its water. Remember this was the late ‘90s. Things were great, and the music was even better. One thing that did get better was Tundra’s drivetrain.

For the most part, Toyota Tundra used the I-FORCE v8 in different displacements complementing its trims. However, the new re-design of the 2022 model gives it not only a different look but a different engine as well. The 2022 Toyota Tundra can come in two drivetrains. A twin-turbocharged v6, or a twin-turbocharged hybrid v6. Both of these two drivetrains are immensely more powerful than the previous v8 engines pushing out better torque and horsepower. Also, a v6 means better MPG for both the hybrid and non-hybrid models. On average, you can expect to average anywhere from 17-23mpg combined with the Tundra hybrid. 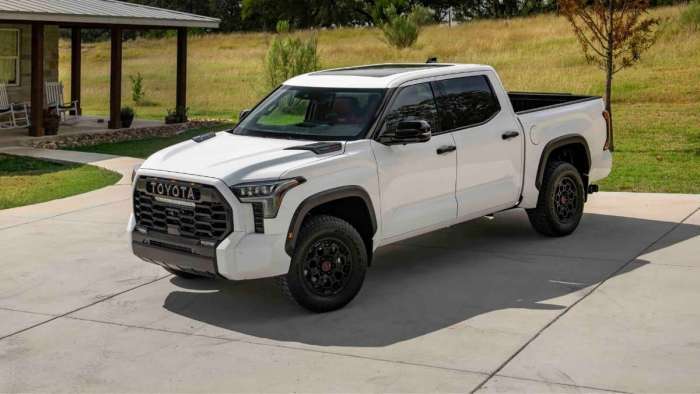 On paper, this sounds great, but upon release and delivery of the new 2022 Toyota Tundra, some people started experiencing breakdowns. One driver broke down not a few miles from the dealership after he picked up his truck. Just recently, another problem surfaced of side plastic trims on seats cracking after getting in and out. Granted, it’s a hit or miss with the 2022 Tundra. You either get a very well-built Tundra that’ll serve you for many years, or you get a lemon that will be the reason why you keep getting calls from the dealer.

However, a recent post on Facebook’s 2022+ Toyota Tundra group showed that owners, regardless of issues, actually like the new engine setup. Even skeptical owners who loved the v8 said they loved this new drivetrain. Ken Cofer asked the group, “How do you guys like the new motor?” To my surprise, the entire comment section, all 20 comments, were filled with nothing but positive compliments on this engine.Granted, the problems on Tundra’s are the turbos rather than the engine itself so I don’t see that as too surprising.

Alan Bickford said, “I still have my two older 5.7 Tundras but this one...would suck them in the air filter and spit them out the exhaust. Love the power.” It’s true, while a smaller engine, the v6 drivetrain makes way more horsepower compared to the later v8s.

Michael Molnar said, “It's awesome, I thought I'd miss a v8, but no because it hauls ass and it's quite sure, but that’s it.”

The positive comments keep going on and on and it’s funny because if you go to one forum, it’s a discussion of how unreliable the 2022 Toyota Tundra is, your go-to to another and its praises and glory. I think that the only reason why we are seeing so many tundra problems is because of scale. Let’s say Toyota sells 100,000 Tundras this year. If only 5% of those have problems, that’s 5,000 defective Tundras. 5% doesn’t seem a lot of 5,000 surely is. Any problem for Toyota is a problem at scale because of how high their quantitative numbers are.

This means that without any proper controlling aspects, whether it be wastegates, seat trims, or brake rotors, Toyota cannot redeem itself as the number one truck maker in America. The only reason why the older Tundras were good was because of numbers and reliability. We didn’t look at cosmetic looks or interior amenities. True the new Tundra looks really nice from the outside and the interior is something out of the Starship Enterprise but if you base a car’s reliability on that, you are not going to get really far.

What do you think? Let us know in the comments below what your thoughts are on the new 2022 Toyota Tundra’s drivetrain.

Dustin Rowland wrote on May 29, 2022 - 4:37pm Permalink
Let's see how many miles they get before the turbos or intercoolers go out. As Toyota stated before after longevity is an issue and take in account the cost of failures you'll never come out ahead in the long haul.. Big brother made them do it... Want power throw a supercharger on the 5.7 and compare..
Ryan Nelson wrote on May 29, 2022 - 5:10pm Permalink
First off, the new Tundra does produce "way more horsepower" the regular TT V6 produces a whole 8 more hp while the hybrid offers 56 more hp while the hybrid is a decent improve its not massive. It's about 15%. I do love my new Tundra, I drive a wind chill pearl Limited 4x2 and I get 24 mpg hwy and 19 city. The get up and go is definitely more pronounced I. This one over my 2019, but that's because the torque has a much needed improvement.
JK wrote on May 29, 2022 - 6:09pm Permalink
3000 miles on my 2022 sport. No complaints at all. Love it. There was a problem with the back seat drivers side. Loose material on the corner (how it passed any inspections I don’t know). But Toyota ordered a new seat for me so no big deal. The only other thing is the window seal on rear passenger door is coming loose. But drivetrain is top notch and love it!!!
Bapakbob wrote on May 29, 2022 - 7:05pm Permalink
A quart of performance out of a pint-sized motor. That has always been the story behind a turbo motor. The first Chrysler turbo motors in the eighties only had a 48k drivetrain warranty. Chrysler KNEW the turbo bearings would fail past 50k miles. We have come along way, turbo motors may go 100k trouble-free now due to new materials; but v8 tundra motors can POSITIVELY go 10 times that distance with only oil and filter changes. Enjoy the new novelty, please come back with pics of your 100k, 200k, 500k and million mile turbo-motor odometers, along with the typical 5.7 V8 TUNDRA'S caption. "All trouble-free miles!" When the new wears off I believe the turbo tundra will elevate the v8 Tundra to HILUX desirability: Hard to find, expensive to buy.
Kyle wrote on May 29, 2022 - 11:54pm Permalink
I literally test drove a 22 tundra it's slower to my tundra. The 0 to 60 times stock for stock are the same vs the V8. It makes 8hp more lol Rather buy the F150 ecoboost that makes 430hp and is faster and tows more and has more features than the tundra.
Kyle wrote on May 29, 2022 - 11:58pm Permalink
Also the supercharged 5.7 will DESTROY the new fugly tundra. If I need a new truck I'm buying a Ford anyway.
Jorge Di Salvo wrote on May 30, 2022 - 10:26am Permalink
All I can say is that what Totota put in the market barely came closer to what the competition offers. As always they are still behind when it comes to tech but now in looks as well. For these reasons I placed an order to replace my 2015 Tundra and that is a F150 Lariat, which by the way, for the same cost of a Tundra Limited I will get a lot more.
David wrote on May 30, 2022 - 10:32am Permalink
I have owned Toyotas for many decades and though there are a few with problems I would never change to any other car. I've owned a couple of GM's and I have lots of friends who own GM products I would never take a GM over a Toyota. You could not even give me a GM product for free. I know Toyota will fix this issue and they will again be the topic of all vehicles
edward suleiman wrote on May 30, 2022 - 7:07pm Permalink
I will never own a domestic truck, just trash. Toyota resell value alone is worth owning one.
Hondo boy wrote on May 30, 2022 - 9:53pm Permalink
Looks of Tundra kinda took a slump, hope they return to something more eye pleasing, Nissan Titan made same mistake there’s looks like a camel face new Tundra similar to catfish face, remember the Ford Edsel
Ed Rice wrote on May 31, 2022 - 2:10pm Permalink
I had a 2005 that had over 550,000 miles on it when the motor gave out.
Rick Brissey wrote on June 1, 2022 - 11:07am Permalink
I have had my 2022 1794 TRD OR for 3 months now, 11k miles. Ive kept up with the forum comments and have had a watchful eye for all the issues experienced by others. So far, so good. As for the performance, my only complaint is that when i took it out to the Salt Flats (i live near by), i found it was governed at 109 mph! Ha. Other than that, i played with it for a half tank out there, and was very impressed with the performance, especially in Sport Mode. As a life-long and multi-Toyota owner, i have been pleased and impressed with this truck!