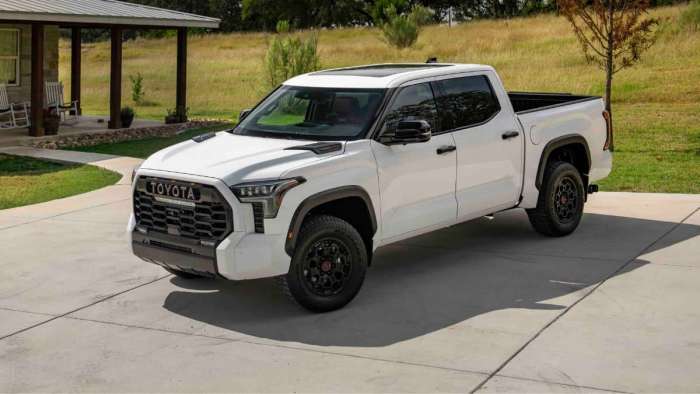 A major post on Facebook showed just how early some 2022 Tundra owners are bringing in their trucks to get new rotors.
Advertisement

A brake rotor is the part of the brake assembly that the caliper grips onto thus stopping it and slowing down the car. This is usually a solid piece of machined metal with a special coating of ceramic or other synthetic protection to insure a rust-free and long life. On a good daily driven truck, you can expect your rotors to last up to 70,000 miles and maybe longer. If problems present, you might just need a re-surfacing but rotors usually last long.

Most brake rotors are made of iron with a ceramic coating to prevent rust. Usually, as heat and friction start to eat away at the surface, the rotor’s surface ends up being uneven or may have hotspots. These end up making the truck not brake well and lead to longer braking distances and maybe even squealing.

One thing however is that brakes last a long time. So, it came as a surprise to me when Luciano Strinati posted on the 2022+ Toyota Tundra Facebook Group saying, “Reached 10,000 miles without a problem. However, I need to replace both front rotors this weekend. I'm not feeling too great about that.” 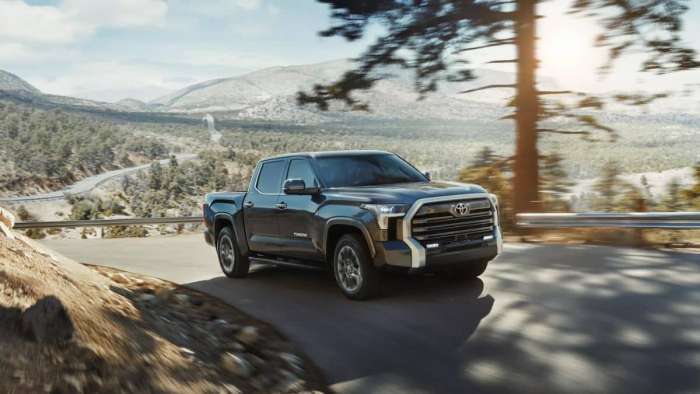 Here’s the thing with brake rotors. Even if your truck is over 2 tons and is very heavy, a solid piece of machined metal should be able to stop your car longer than 10,000 miles. Luciano even said that he hasn’t towed anything or done heavy driving. The question here is, why did it fail so soon? Let’s take a look and see what other owners said.

Wallace Casey said, “Both of my previous Tundra’s had warped rotor issues. Nothing new and went aftermarket and had no issues.” Aftermarket rotors for a 2022 Toyota Tundra range anywhere from $80-$400. I personally wouldn’t put anything aftermarket on my truck unless it’s tested but who knows? Maybe the Chinese have stepped up their aftermarket auto parts game.

Even if you replaced the rotors on previous Tundra’s, for a reliable truck like the Tundra, you shouldn’t have to replace rotors after only a few thousand miles. That means one of two things. One, you drove it like a go-kart. Or two, you towed an overweight trailer. But would this service be covered by your bumper-to-bumper warranty?

Unfortunately, this isn’t something that your warranty would cover. According to a Toyota dealership, “Components of your car that have to be repaired or replaced because they are worn out from use are not covered under the warranty.” Things like brakes, brake pads, filters, etc.

However, unless Toyota releases a recall on these Tundra’s specifically for their brake rotors, it may be a liability issue for Toyota. Also, according to another comment posted by Luciano, a shop told him that Toyota was keeping the weights of these rotors down for better gas mileage.

This may come as a surprise since the Tundra already gets terrible gas mileage (in terms of the number). However, could this be the reason why they need replacing at 10,000 miles? A heavy brake rotor means that it is more tolerant to factors like heat and friction. If I make a very heavy rotor out of durable metal, it is going to last longer than a rotor made of aluminum. Toyota could go the route of making carbon fiber brakes which not only last long but weigh less as well but those are very expensive.

Lamborghinis use carbon fiber brakes, and a set is about $4500-5000. Imagine your Tundra with Lambo brakes. While Toyota should address this problem, make sure you talk to your dealer about this warranty loophole that won’t cover your brake problem. No car, even sports cars’, brakes last shorter than 10,000 miles.

What do you think? Should Toyota issue a recall for the 2022 Toyota Tundra because of a brake issue? Let us know in the comments below.

damnfingers wrote on May 10, 2022 - 8:52am Permalink
Maybe your reporter should avoid getting their stories (and answers from Facebook) and actually approach Toyota about the problem.
Kevin Owens wrote on May 10, 2022 - 9:29am Permalink
This is definitely a recall item if it affects safety of vehicle.
Harutiun Hareyan wrote on May 16, 2022 - 8:35am Permalink
Hi Kevin, Do you think so? I would agree if this problem were to happened to at least 40% of Tundra owners. Toyota is pretty good at catching errors before they leave but because this is a new car in its first year of production, there could be some missed spots. Thanks for the comment.
Michael wrote on May 10, 2022 - 9:35am Permalink
Yes there is a number of things I think they should issue a recall on and the brake rotors is definitely one of them we have a 22 tundra we supposed to get tomorrow and I’m scared to drive it because of all the recalls and issues that people have been reporting. To spend $60,000 on a vehicle and have to wait to get it and then have to keep taking it back to the dealership because of warranty issues is really making the tundra look bad. This is my first Toyota I thought I would try one because of all the issues that Chevrolet was having with their’s but it doesn’t look like they are any different.
Harutiun Hareyan wrote on May 16, 2022 - 8:38am Permalink
Hi Micheal, The Tundra has been known as a pretty reliable truck. I think ever since they started to add more tech, the quality diminished. Also, this is the first year of production for this generation. I think probably the 23 or 24 models will start to have a better rap on their reports.
Joe thomas wrote on May 13, 2022 - 10:46am Permalink
I bought a new Tacoma last year and it immediately started pulsing. I at first thought it had something to do with the automatic braking system. But no its bad rotors. Within the first year. I don't need excuses. My 2013 Chevy half ton I traded in had 180k miles with original rotors. I didn't drive crazy or pull heavy loads with either truck. I think it pithetic. Yes tell me it for gas mileage. My old Chevy 2wd 5.3 got 20mpg. This Tacoma gets 21. And it hunts for gears as well. FACT I miss my Chevy. This is the first new Toyota I have bought. Toyota you missed your chance to impress me with reliable.
Harutiun Hareyan wrote on May 16, 2022 - 8:42am Permalink
Hi Joe, I think that the Tundra reliability issues have really taken us by surprise. I did not expect this many problems to occur within the first year of this generations production. Hopefully they will get better as years progress. A lot of first year cars see mass production issues with simple things like breaks or rotors or even engine problems. The new Tundra seems to be part of that group.
Ryan wrote on May 13, 2022 - 12:16pm Permalink
Tacomas and tundras are notorious for warped brake rotors. I replaced my tacomas with slotted race rotors and the shaking went away. I.e., no more warping. It's an easy swap to do yourself. Order them at CarID.com. Take the wheel off. The rotor has some bolts. Undo them. Bang on it with a hammer until the rotor comes off. Reverse process to put new ones on. If you're a pussy, pay someone a couple hundred bucks to do it.
Carolyn Carolyn... wrote on May 13, 2022 - 1:36pm Permalink
yes there should be a recall. If the average rotor last for 70000 mi, it states Toyota took. a short cut at our expense. Correct the problem Toyota
Harutiun Hareyan wrote on May 16, 2022 - 8:44am Permalink
Hi Carolyn, Thank you for the comment. I hope Toyota will fix it as well.
D wrote on May 14, 2022 - 12:36am Permalink
So not saying you did BUT if you were hard on the brakes when you were very ow miles it may be the cause.Either way if your below 10k Toyota im sure would remedy them by turning them. Not what you want to here when new but unless totally warped the only real fix apart from replacing rotors altogether
Harutiun Hareyan wrote on May 16, 2022 - 8:45am Permalink
Hi D, Thank you for the comment. If I was to ride on the brakes, then yes it would be a problem. However the driver in this instance stated that he didn't and that he even tow anything or ride the brakes. Do you think a re-surface would do the job?
Neil wrote on May 14, 2022 - 9:26am Permalink
This reporter sucks…. Did you guys even screen the article? Aluminum brake rotors? Did he really say that…
Joey wrote on May 16, 2022 - 12:00am Permalink
Well if someone posted it on Facebook then I think Toyota would have to do a recall...... This is a ridiculous article. Also, not all aftermarket parts are made in China. SMH.