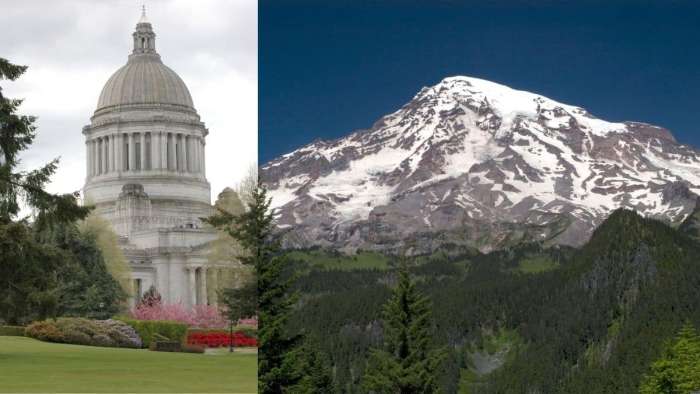 Last week the Washington State legislature passed a bill, now heading to Governor Inslee’s desk, that bans the sale, registration, and purchase of new gasoline powered vehicles, beginning with model year 2030. An earlier bill proposing the same, though also including a controversial road usage fee, was rejected last year. This time the bill doesn’t include the fee and is likely to pass. If it does, Washington State’s ban will go into effect before all other states.
Advertisement

I happen to live in Washington State and want to point out that the bill actually does a lot more than just ban new gasoline powered passenger and light-duty vehicles from model year 2030 forward. It will fund proportional efforts to improve the quality of life of those communities most impacted by water, air, and land pollution caused by transportation and seeks to eliminate health burdens and other disparities from such. It may be one of the most ambitious efforts by any state government to begin to address the environmental and societal damages caused by our use of fossil fuels.

According to Eletrek, Hawaii, Rhode Island, and some cities in California have also endorsed a 2030 timeline or introduced bills that also target a 2030 ban, but otherwise the only other U.S. state bans in place are for 2035 or later. Given that the major automotive manufacturers that produce and sell gasoline vehicles are typically targteting 50%, or less, of their total 2035 volume of production to be “electrified” (which doesn’t necessarily mean fully electric), if more states follow Washington’s lead and pass earlier bans, things could get very interesting as states “compete” for more market share of all electric vehicles. Let’s briefly review the electric vehicle production plans of the 5 leading electric vehicle manufacturers other than Tesla (which is the undisputed sales leader and only makes electric vehicles to begin with). These manufacturers are: Kia/Hyundai (considering them as one company for the sake of broader total production), Ford, Volkswagen Group, General Motors, and Nissan.

Both Ford and GM have said they plan to outsell Tesla by 2025. Tesla sold well over 300k EVs in the U.S. in 2021, and with their new Texas factory coming online this month, will most likely sell more than 2x that amount by 2025, which means Ford and GM both will need to sell well over 600,000 EVs each, per year, by 2025. What is most important to point out is that both manufacturers are the only ones selling, or with announced plans to sell, lower priced “work trucks” and vans like Ford’s F-150 Lightning and E-Transit (the kind that fleets would favor), compared to far more expensive luxury and lifestyle vehicles that are the types on sale today. I should point out that start-ups, like Rivian, have contracts to build fleets of electric delivery vans and other start-ups may have similar contracts, but many of these may not be for sale to general consumers or smaller, private businesses. Stellantis intends to offer a Ram electric pickup in 2024 as well, and brands like Tesla and other start-ups may at some point offer lower priced electric pickups and vans that would appeal to fleet and small business customers too. This is all very relevant because pickups (and SUVs) represent a much larger total share of the U.S. new vehicle sales market than passenger cars. For 2020, of the approximately 14.6 million new vehicles sold in the U.S., pickups and SUVs represented more than 3x the volume of passenger cars (at 11,058,337 versus 3,519,034, respectively) and this trend only increased in 2021, with about 3.5x as many pickup and SUV sales (aka “light trucks”) than passenger cars. Of course markets and customer preferences can and do change over time, but typically such trends shift over a matter of decades. Thus, we can probably assume that in 2030, U.S. purchasing habits may be similar.

It would be an absolutely stunning achievement if Ford and GM can catch Tesla by 2025 though, considering that both sold less than 30k EVs in 2021 and 4 years is not a lot of time to increase production by more than 20x. Kia and Hyundai combined may sell over 100k electric vehicles combined this year, and certainly a lot more than that in coming years with buzzworthy options like Kia’s large EV9 SUV, a forthcoming dedicated pickup truck and a lower priced entry level model. Of course, supply chain issues could change all of that. Given Kia’s most recently updated plans for growing EV production, and similar plans from Hyundai, it is reasonable to think that Kia and Hyundai combined may sell a similar number of EVs, if not more, as either Ford or GM in roughly the same timeframes.

Volkswagen Group will certainly try to compete with these brands as well, but due to their more significant supply chain disruption caused by Russia’s war in Ukraine, and their smaller slice of the U.S. market in general, they will likely sell less than these others. Nissan is a bit of a wild card, but given their slow roll out of new EV models and ongoing supply chain issues, I wouldn’t expect them to sell nearly as many EVs as the others in the top group. Other manufacturers will also be making EVs of course, and some may even make more than these currently leading brands.

All told and with some crude math, it would seem like an estimated 2-3 million EVs could be sold in the U.S. by 2030. Washington State had only a 1.7% share of the total U.S. new vehicle registrations in 2020 according to the National Automobile Dealers Association (NADA). As such, somewhere north of 250,000 new vehicles per year may be Washington State’s annual capacity for consumption, based on the most recent year’s data (2021). For reference, for 2021, there were somewhere around 20,000 new electric vehicles registered in Washington. Washington is also considered the second fastest adopter of electric vehicles, behind only California, when normalized by population, according to AAA. But still, to meet Washington’s 2030 goal means a sustained annual increase of 40% in EV adoption for the remainder of the decade, something I can only describe as ambitious. Never mind that, as AAA points out, there has been a 188% increase in EV registrations in WA state since 2016, because we were starting from a low single digit % of total sales then. With Washington EV sales now possibly crossing into the double digit % share in 2022, and increasing from there, we certainly have good momentum. However, a confluence of production constraints (due to global raw materials supply and supply chain problems) and the market demand for light trucks and SUVs (which require a lot more batteries than smaller passenger vehicles, which mean fewer can be made and that higher prices/more profitable trims will dominate sales) is almost certainly going to make it difficult, if not impossible, for Washington State to achieve this goal in only 8 years.

Don’t get me wrong, I want Washington State to succeed in this goal and am very encouraged by the government’s expressed intentions to do so while addressing historic inequities in the process. Yet success depends upon the availability of models that all new vehicle consumers (including the state government itself) need and can afford, as well to some extent on possible changes in vehicle ownership trends that may shift as vehicles become capable of fully autonomous operation, which may lessen private vehicle ownership over a (very) long period of time. At the moment, we aren’t even close to that reality and we have a long, long way to go in the next 8 years. What do you think?

Images of the Washington State capital and Mt. Rainier provided by Freeimages.com