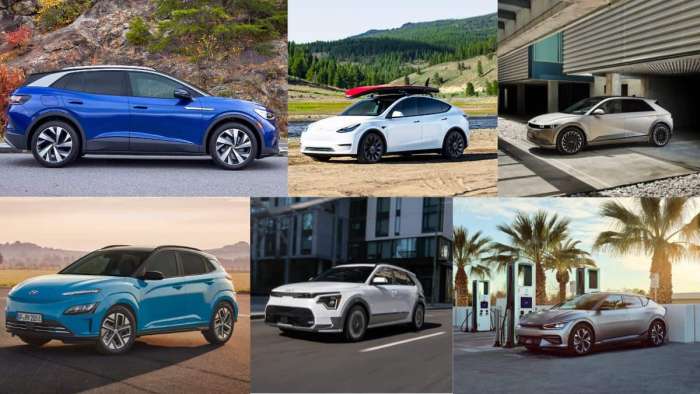 Conspicuously, Bloomberg Intelligence has completely ignored one of the largest and fastest growing electric vehicle (EV) producers in the world in its recent business intelligence piece on global battery-electric vehicles sales. More accurately, I should say they ignored two of the largest and fastest growing companies, Kia and Hyundai, which are so closely tied we can justifiably consider them as one company.
Advertisement

I won’t speculate on why Bloomberg may have done this, rather I will critique their analysis in brief. If you’d like to review it, it can be downloaded from the link I embedded. If you prefer a synopsis, elektrek did a great write up on it. While I won’t speculate on why, I will call into question the thoroughness of Bloomberg’s analysis on account of their ignoring Hyundai and Kia’s EV sales achievements and their current and forecasted sales goals in the 2025 timeframe. Kia, for example, has a global EV sales target similar to BMW, which Bloomberg did include in their analysis, according to InsideEVs. Hyundai’s EV sales goals for 2025 are similar to Kia’s, and for 2030 are even more ambitious. Combined, Hyundai and Kia would be in the top 5 EV producers, globally, producing over 1 million EVs annually by 2025, more or less at the same level of Ford, GM and others that are expected to be global leaders in EV sales and production at that time. The fact that Bloomberg doesn’t even mention Kia and Hyundai suggests a significant hole in their research and analysis.

This is not to say I don’t agree with their base assertion, that VW is “poised” to take the lead from Tesla as the global leader in EV production. VW is investing more heavily in battery production and plans a broader electric model range than other manufacturers, and this gives them their poise. However, that poise is not a guarantee. I would suggest that while VW is the most likely to challenge Tesla for global EV sales dominance, it is unlikely that this will happen in the timeframe Bloomberg suggests (i.e. by 2025). It may be more likely to happen by the end of the decade, however, given the time it takes to increase the supply of raw materials for batteries in a world still recovering from the pandemic and regional conflicts that are destabilizing markets and the global economy.

Here are the main reasons I feel Bloomberg has missed the mark (there are others that I won’t go into, now). First, VW is a dominant player in the European EV market, but is far less significant a player in the other two largest EV markets, China and the U.S. While VW has ambitious plans to capture significant market share in the U.S. according to elektrek, there are significant hurdles VW would have to overcome to achieve those ambitions in the U.S., at least. Those hurdles are price, availability and (perceived) value. In short, if VW is going to take the lead from Tesla, it has to sell more EVs than Tesla. The average base price of a Tesla, as of today, is close to $85k though that isn’t an average price by sales volume. I expect that figure would be lower, closer to $70k. Because Tesla is able to lead the world in EV sales with vehicles costing, on average, in the neighborhood of $70k, VW and other automakers seem to assume or plan on selling very large volumes of similarly priced EVs. But therein lies the issue: how many Americans are willing to spend $70k+ on a VW EV? Not nearly as many, I would propose, as would spend that amount on a Tesla because VW’s perceived value is less than Tesla’s. For proof of this, simply look at the software each company produces for use in and with their vehicles. Tesla managed to use its software to help minimize impacts from the pandemic induced semiconductor shortages that have plagued the auto industry in recent years. Tesla is as much a software company as it is an automaker, and other car companies, VW in particular, are quickly trying to emulate Tesla in this but it will take several years for that focus and talent pool to be built, not two or three. Further, Tesla’s supercharging network provides perhaps the most value. Although VW has (forcibly) invested billions in building out an EV charging network in the U.S. over the last few years and continues to do so, that charging network is still not as robust or reliable as Tesla’s, nor is it as easy to use. We should not underestimate the value of ease of use, excellent design, and reliability for these factors. Tesla’s advantage here is staggering.

But you may say, VW is also going to be selling a lot of Audi and Porsche EVs in the U.S. There’s no doubt this will happen, as these luxury and performance brands are quite popular in the U.S. But given that Tesla already outsells them now, with their gas vehicle sales included, an increased number of EV options for those two VW brands is unlikely to come fast enough to significantly boost VW’s place in the U.S. market. No, in order for VW to take on Tesla in the U.S. market and surpass Tesla globally by 2025, they need to massively increase the sales of EVs that cost less than the average price of a new vehicle in their respective markets. In the U.S. the average new vehicle price is well over $40k, depending on which sources you check and the timeframe of the estimate. The VW ID.4, which is VW’s only EV on sale in the U.S. today, is already a little below that average. But it isn’t selling in significant numbers yet. That could change of course, and likely will as VW brings U.S. production of that model online, but VW isn’t likely bringing out many (or any) models that might cost less than the ID.4 in the U.S. If they expect to capture large shares of the U.S. or Chinese market with just one model, that seems quite a stretch. Of course, VW is planning other models like the Buzz, but at a price point that may be north of $70k, I think VW will have a very hard time selling the more expensive models in numbers comparable to Tesla’s current model Y sales, which are in a similar price range. VW simply doesn’t have the perceived value in the U.S., and perhaps in China as well, as Tesla does so it will be hard for VW to justify its prices. In my opinion, the only way VW will be able to challenge Tesla for sales dominance in EVs by 2025 is if they can sell very large volumes of EVs that cost between $25k and $38k. They may pull that off in Europe, and perhaps in other markets too, but I think it will take 2-3x longer than Bloomberg suggests or VW hopes to do this. VW, if it wants to dominate EV sales, has to return to its roots as “the people’s car”, and I’m sorry if the reality is stinging, but the vast majority of people can not and will not buy a $70k+ vehicle, period.

Carmakers like Kia and Hyundai already sell EVs that are priced less than VW’s lowest priced EV in the U.S. market. VW may bring down prices with local production and may bring out additional lower priced models too, but Hyundai and Kia can do the same and are already ahead in terms of models on sale. In reality, in order for VW to sell more EVs than Tesla, it also has to take market share away from other brands in the top 5 or top 10. I know other brands are not going to sit still and watch VW take their market share. Those brands will be going after market share that overlaps all of VW’s branded models too. As such, VW has a very tough road to the number one spot.

Questions? Please leave them or any comments below.

Justin Hart has owned and driven electric vehicles for over 14 years, including a first generation Nissan LEAF, second generation Chevy Volt, Tesla Model 3, an electric bicycle and most recently a Kia Sorento PHEV. He is also an avid SUP rider, poet, photographer and wine lover. He enjoys taking long EV and PHEV road trips to beautiful and serene places with the people he loves. Follow Justin on Twitter for daily KIA EV news coverage