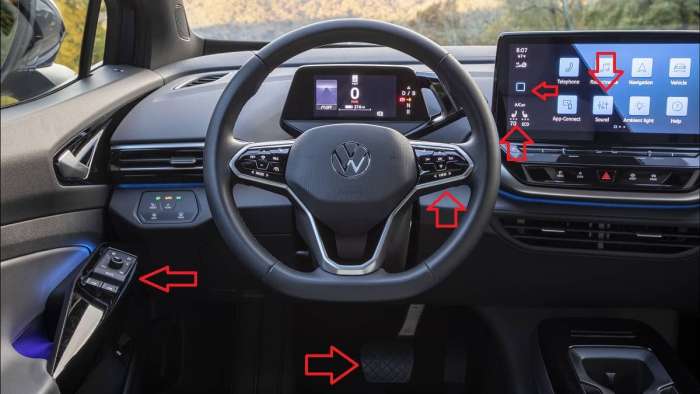 “Spongy, wonky, annoying, disappointing, frustrating, and not working.” The VW ID.4 controls have stirred some controversy. Here is how one experienced EV testing team broke down just how terrible some aspects of the ID/4’s design are in their opinions.
Advertisement

The all-new ID.4 is Volkswagen’s battery-electric vehicle designed to hit the bullseye in the middle of the increasingly-crowded two-row electrified crossover marketplace. The ID.4 is outstanding in many ways, and buyers have lined up to take delivery as soon as any become available. However, one aspect of the ID.4 has drawn some jeers among the vehicle’s many cheers - its controls.

The basic theme behind VW’s ID.4 interior is change for change’s sake. Like Tesla, who started with a clean sheet of paper when it designed its innovative (and also controversial) interior controls, VW wanted to do as much as possible to break from norms. The problem is that some things VW did moved the vehicle’s ergonomics and usability in the wrong direction.

The window controls get the most mentions by testers and owners alike. They are confusing when they work and frustrating when they don’t. Veteran electric vehicle tester Keith Barry is a member of the Consumer Reports team known for his insight and attention to detail. Watch him walk through the inability of the ID.4’s infotainment controls to sense his wet fingers. They were wet from having opened the car door in rainy New England. As Barry explains, the ID.4’s touch-sensitive volume controls aren’t. His comments on that topic begin at time-stamp 8:15. The underlying issue? VW felt that its owners no longer deserved a volume knob. Barry also takes issue with the fact that the vehicle’s gear selector (Park, Neutral, Drive) is hidden from the view of the driver.

CR’s Mike Monticello weighed in and used the seat heaters as an example of bad design. He illustrated how just turning on the seat heat requires multiple touches of the infotainment screen. The team jokes about how that menu is called “Clima.” Not climate. The underlying issue? VW took away your heated seat thumb wheel (that they perfected decades ago).

The team then moves onto the blue square of mystery that appears on the illuminated infotainment screen. Mike calls it a “Chiclet.” Adjectives the team uses to describe the ID.4’s controls include “spongy, wonky, annoying, disappointing, frustrating, disaster, and not working.”

Lest you think this team is made up of Luddites, the trio contrasts the ID.4 with the newer Hyundai IONIQ5. “I love that this car is the future. I love that,” says Barry.

The group also points out how the ID.4 does not have the feel that they come to expect from a German vehicle. Despite the handling and controls complaints, the overall review is not entirely negative. Mike Monticello sums up the ID.4 as “..a pretty decent car overall.”

Are the folks at Consumer Reports being too tough on WV? Do you own an ID.4 and take issue with the facts the group mention or just their opinions? Tell us in the comments below.