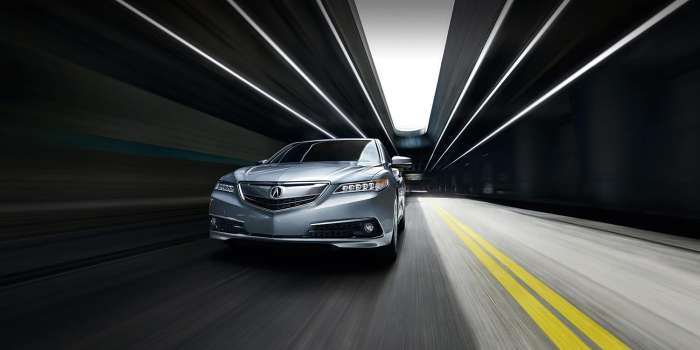 After dropping by Apple Computer's campus for lunch with Chef Eric King, we headed off to Stevens Creek Auto Row, Talk about a toy store for adults. One can find every domestic and world brand make and model on Stephens Creek auto row. After drooling over the Lamborghini, Maserati toy fest, we pulled onto the busiest Acura lot in the Western United States, the view was impressive.

We've never counted so many high-end trade-ins on an Acura lot.

Torque News was here to measure the buying public’s reception to the release of the all new 2015 TLX. AutoNation had received 8 in their initial order, we counted 3 in view, including the black on gray V6 with P-AWS sitting on the showroom floor. We love the body lines of this car,stunning!

Greeted at the door by Chad Cleary, manager of internet sales, we were shown around the state of the art AutoNation showroom, offered coffee, water or a soda and entered into conversation with Chad as to the public’s response to the 2015 TLX. Chad’s a consummate car sales guy, he loves his profession. none-the-less, his excitement and enthusiasm as to the TLX was genuine, contagious as well as measurable. These guys have no problems selling Acura.

According to Chad: “TLX offers exceptional value and performance in an affordable performance sedan, filling a niche between the Civic platformed ILX and the state of the art luxo cruiser RLX.” “TLX incorporates the speed and agility of the outgoing TSX while retaining the interior space and comfort of the now retired TSX,” says Chad. While we've been accused of going soft on Acura reviews, Chad makes his living slinging Acura, He likes TLX.

We've driving all 3 TLX models and agree with Chad. TLX represents the best value in a premium mid-level sport sedan. With a base MSRP of $33,900, TLX goes toe to toe with BMW 328i, while providing exceptional fuel economy and best in segment interior ergonomics and comfort.

Driving around the Bay Area we note that San Francisco and San Jose is Acura and Honda ground zero. We believe that AutoNation will sell as many TLX Sport Sedans as Acura will afford them. Chad tells us that it will be a couple of weeks before AutoNation receives their first 2015 TLX i-4. We believe that this car may be car of the year for 2015.

We look forward to reporting from Sonoma Raceway next week for coverage of the Pirelli World Challenge.

Next Saturday and Sunday Peter Cunningham of RealTime Racing will pit the 2015 Acura TLX GT against some of the finest cars and drivers in the world.

Note: Our thanks to Chad and the crew at AutoNation Acura Stevens Creek.