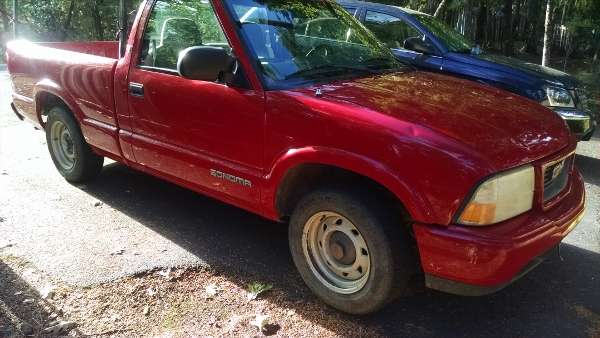 Last week we picked up a 1999 GMC Sonoma compact pickup truck and drove it 300 miles to its new home. Averaging well over 30 mpg on regular gasoline, we now ponder the true reason behind America’s inability to cross the high-mpg barrier.
Advertisement

Granted, with an original MSRP of $12,000, our lil’ test truck is as bare bones a truck as one could buy in 1999. A GMC Sonoma 2 wheel drive SL model sporting the Vortec 2200 CC fuel injected 4 cylinder gasoline engine,[115 horsepower,135 ft-lb torque] married to a 5 speed manual transmission.

Topping off the short list of standard features is a window hand cranks, mechanical slide seats, heat but no air conditioning, and rubber washout mats. Personally, I love the simplicity of this compact pickup truck.

Our new find was discarded on the “back 40” of a northern California farm. The interior was so covered in dust and dirt that we truly couldn’t discern the color of the high back bench seat or floor covering. The driver’s side of the bench seating is worn down to the frame. But, rust-free, bright red and comes complete with a lumber rack.

Free for the taking, but did she run?

Due to a dead battery, the “lil’ beater” hadn’t been driven in more than 2 years, and there wasn’t anyway to determine how or if she’d run without juice. So, we purchased a new battery, checked the fluids and belts, added some premium leaded fuel and gave the ignition a turn. The fuel injected 2.2 Liter 4 cylinder gasoline engine come to life on the turn of the key. So far, so good.

looking to the gauge cluster we noted an intermittent fuel gauge and a voltmeter that wasn’t oscillating with the rev of the engine. None the less we headed to the nearest town of any size, Fortuna,California and dropped in on the local auto parts store. Placing a tester on the battery, it was determined that the new battery now tested at 1% after 30 miles of driving, confirming that the alternator was dead.

$100 Alternator, engine was and a wrench or two

105,400 miles and counting: Sometimes, more often than not, one get’s what he or she pays for. Although initially free for the taking, we know wondered if the dead battery and alternator was just the tip of the iceberg as to the project that lay ahead. With a bit of luck we would head back to Eugene,Oregon, a trip of 300+ miles the following morning. My thanks to Jacob McCants, owner of “Revlimeters” of Eureka, California for installing the new alternator.

Hey, driving is driving, but this compact truck is a basic as it gets. While one won’t find copious amounts of torque generated by this rather mild 4 cylinder gasoline workhouse, it does pair well with the manual 5 speed transmission and rear drive differential.

Situated between Grants Pass and Eugene, Oregon is a 2,000 ft elevation grade or two. Our little beater took the hills in stride, found usable torque in 3rd and 4th gear while averaging a bit better than 30 MPG along the 300 mile journey.

Returning to Eugene, we dropped in to a quick lube, changed the rear differential fluid, and engine oil, topped off all fluids and equalized the tire air pressure. The more we drive the ‘lil’ beater’ the better she runs. Personally, I’m thinking about a mild restoration. We’ll keep you posted.

John Goreham wrote on September 25, 2015 - 4:04pm Permalink
Such a cool story.
Parks McCants wrote on September 25, 2015 - 4:19pm Permalink
Thanks John. It's always fun to find a relative bargain. Loving it!
Jake Guzman wrote on September 29, 2015 - 7:50am Permalink
Great story! I have 99 pick up with a V6. I picked it up for almost nothing. I used resources like youtube to assist me in restoring it. Youtube is a life saver. All the details to help you sustain your pick up can be found there. I had a 92 same as yours with A/C and I would get 30 miles to the gallon. Chevy did a great job. Thanks for posting this article. Keep the stories coming.
Parks McCants wrote on September 29, 2015 - 10:54am Permalink
Thanks for reading Jake. It's a great little truck. (the wife's not a happy as I am about the find) whattttttteva. Hey, I'm goindg to have some fun taking it to the next level. Take care.