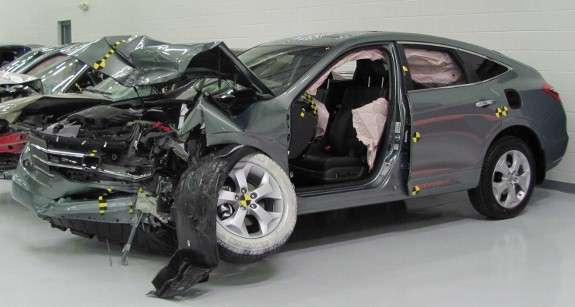 Most educated car buyers knowingly exchange the inherent safety of a larger vehicle for the fuel economy and ease of operation of a smaller auto. They weigh to possibility of a possible future accident against the advantages of small car ownership.

All “micro cars” tested by the Insurance Institute For Highway Safety failed to rate high in the “small overlap” evaluation. Honda was not the exception.

The Honda Fit landed at the bottom of the group with the Fiat 500. We believe the test results to be eschew as to taking into account the total safety picture as to technically advanced safety features.

The question as to rather size equals greater safety has circulated through the auto industry for decades. In the last century “ bigger was better.” Automotive crash safety was equated to the size and weight of the vehicle and how the overall mass of a Chrysler 500 afforded greater protection to the occupant, better than a Morris Mini Cooper. The 40 mpg mini car of the day was “killed” by safety compliance, or a lack of it.

Back in the 1950s, seat belts were an option when available and non-padded dashboards was the norm. Nonetheless, the majority of car and truck occupants managed to survive the day of 5,000 pound behemoth Detroit manufactured terror.

Although front end “crumple zones” were implemented in the 1960s along with mandatory seat belts; padded dashboards and safety glass, the world didn't wake up to ‘newsworthy’ safety ratings until the heady days of Volvo and Mercedes Benz superior safety campaigns.

Today, Honda has designed and implemented multiple airbags, front end collision avoidance and lane drift warning systems throughout the product line. These systems offset much of the consumers’ concern as to a car’s girth and come as standard equipment on the Fit Sport.

Today’s news as first reported by the New York Times, has placed Honda, a company that proudly touts its yearly safety award for the Civic, Accord and Odyssey minivan at the bottom of the list with the Fiat 500.

In-fact 11 vehicles tested in what the Insurance Institute labeled as “micro” failed to record a “good” rating in this years newly developed “small overlap evaluation.”

In the “small overlap evaluation test” the subject vehicle is propelled at a slight angle into a front end collision with a stationary object at 40 mph.The test simulates a driver avoiding a “head-on” collision by turning out of the path of the oncoming vehicle. While crash testing the Honda Fit and Fiat 500, the passenger cage was compromised.

In the case of the Fiat 500, the driver’s side door was torn off the car by the impact, implying the possible ejection of the driver. With the Fit and other mini’s an over extended seat belt allowed the impact inertia to propel the driver too far forward.

While Honda and Fiat scored the lowest in the test group, Hyundai,Toyota and Nissan didn't fair much better. The New York Times did acknowledge the total redesign of the 2015 Fit, while the Insurance Institute reminded us that even moving up to the “small car” class will afford driver and passengers a bit more protection in a head-on or side collision accident.

The truth of the matter is that the Insurance Institute for Highway Safety is an independent non profit with yearly revenue approaching $25,000,000. Crash test findings as to crush zones, vehicle damage and possible injury to driver and passenger assists the Auto Insurance industry in rating the car for premiums and claims adjustment.

We believe that electronic crash avoidance, superior braking and safety cage design should be taken into consideration when shopping for a small or mini-car.

Parks McCants wrote on January 22, 2014 - 4:54pm Permalink
Update: Consumer Reports has retracted their "Buy" recommendation for the Honda Fit based on the the results of this crash test...