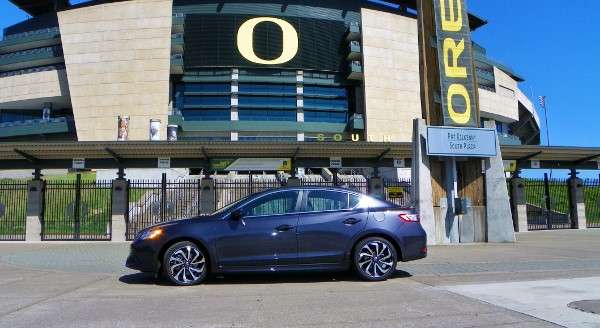 Not all buyers require 3 rows or SH-AWD

Personally, I like the drive feel and handling aspects of Acura’s compact crossover. It’s easy to maneuver in town yet affords the driver confidence through a truck-like stance and driver to road vantage point. Catch my latest 2016 RDX drive review here.

For a car that’s been panned hard by my fellow automotive writers, 2016 Acura ILX continues to surprise the industry as to its present sales trajectory. Built on a now extinct compact Civic platform, Acura ILX is the brand's entry portal vehicle, and is proving to be very effective in recruiting would-be German import car drivers into the Acura fan base.

Acura engineering performed a major refresh on ILX in 2015. New engine, transmission, body and wheel design, an uptick interior, expanded personal connectivity, and a much improved ride has all translated to higher sales volume for Acura’s starter-car, if you will. Catch my latest ILX drive review here.
2016 Acura ILX A-SPEC

Although Acura doesn’t break out its sales numbers as to specific trim levels, I can’t help but to believe that performance 2016 Acura ILX A-SPEC hasn’t played a major role in injected a bit of performance excitement into what had formerly been a rather bland premium compact offering. Check out our ILX A-SPEC drive review here.

In the words of Mr. John Ikeda:"Acura posted a solid month even as we gained fresh momentum from the New York Auto Show debuts of the 2017 MDX and NSX GT3 racecar," said Jon Ikeda, vice president and general manager of the Acura division. "Our entire Acura team is excited by the market reaction to our new design direction and the preparation for delivery of the first all-new NSX."

In other news 2016 Acura TLX and Acura’s flagship MDX continues to sell well in this uptick economy. On a personal note, I look forward to driving 2017 Acura NSX supercar in April. I’ll keep you posted here at Torque News.