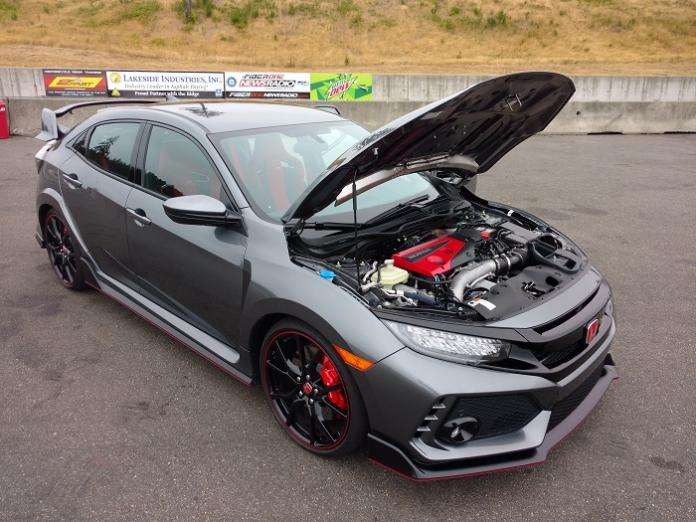 Honda’s world record setting 2017 Civic Type-R is much more than just another race performance hatchback. Dropping into the high bolstered Recaro-like driver’s seat of the much anticipated 2017 Honda Civic Type-R, I fully anticipated an overall miserable drive and ride experience.

Afterall, it’s not often that an auto manufacturer presents a production track-ready club racer that is as comfortable on the road, as it is proficient on the track. Such is the case with Type-R; visually edgy, yet touring car comfortable. Civic Si, yes, it’s a blast to drive as well.

With a ‘what you see is what you get’ no options build platform, outside of exterior color options, Type-R comes in one variant, and one dedicated track proven engine and transmission paring. Far from bare bones, Honda’s performance Halo Car comes to the U.S. for a very reasonable MSRP (suggested retail price of $33,900 + $875 handling;) a screaming performance bargain in a compact performance segment dominated by Ford, Subaru and V.W.. Check out the not so meek and mild Honda Civic Hatchback Touring Sport.

Honda Type-R has the price advantage. And from where I sit is arguably the most comfortable sport-ready seat Honda has ever produced, Type-R also holds the overall performance advantage. For me, a lifetime auto sports participant and enthusiast, the rest of the story that is Honda’s latest and greatest performance hatchback happens on the street. Civic Type-R although track ready, is a very capable daily commuter and task master. If you keep your foot out of it (ease of on the gas a bit) 2017 Civic Type-R can and will average well over 30 MPG on the highway.

The first Civic to wear the Type-R label in the U.S. is as much a joy to drive on the street as it is on the track -- right out of the box, no modifications required. Honda engineering all but eliminates torque steer in Civic Type-R.

Thursday found Torque News driving Type-R on a racetrack in the Pacific Northwest north of Seattle Washington. The morning air hangs heavy with a slight chill, welcomed after a week of high temperatures, and dank smoke generated by dozens of lightning-strike-fires throughout Oregon and Washington.

15 minutes on a shuttle finds 30 journalist or so enjoying breakfast track side -- there’s a bit of excitement in the air -- after-all, this is the first and last time many of us will see Civic Type-R in person, much less drive one. A very limited production car by Honda standards, it’s estimated that no more than 2500 Civic Type-R’s will be delivered to U.S. customers in 2017. To put that number into perspective, 30,000 + Civics are sold per month in the U.S., this hatchback is rare man!

Does 2017 Honda Civic Type-R live up to the media hype?

Guilty as charged! We’ve been covering Civic Type-R development for the better part of 3-years. 2 years ago, when U.S. Honda Tuners requested, no demanded, the import of Civic Type-R to North America, Honda listened in spades. Thanks to the exceptional low friction, high output VTEC turbocharged engine, and a very forgiving 6-speed manual transmission, Honda’s latest and greatest advent is near intuitive in driver to car connectivity. Civic Type-R steering although electric, has a very natural road to wheel feedback, braking is natural, with no fade noted after 10 miles of 100 MPH plus track laps, high speed braking, and general track abuse.

What we discovered on the track in a matter of seconds, was a seemingly endless peak torque band. And thanks to rev-matched shift mapping, little to no torque drop off between gears. While driving aggressively, Honda designed high bolstered, fabric covered, form-fitted seats ,hold the driver and passenger in place -- firm, yet not painful. The cabin wears massive by compact car standards, something Honda design excels in.

2017 Civic Type-R is built on the manufactured in the U.K. Honda-world-compact-car platform, just like this Civic. Civic Type-R is European car inspired, yet Japanese import thoughtful in design, comfort and utility. Following 3 hours track side, we drove 180 miles of country roads,mostly 2-lane. Thanks to Civics much improved frame rigidity, active adaptive dampening, and arguably the most comfortable seat in the segment; I could see driving 1,000 miles non stop in Civic Type-R, something you wouldn’t take on in most track ready performance hatchbacks.