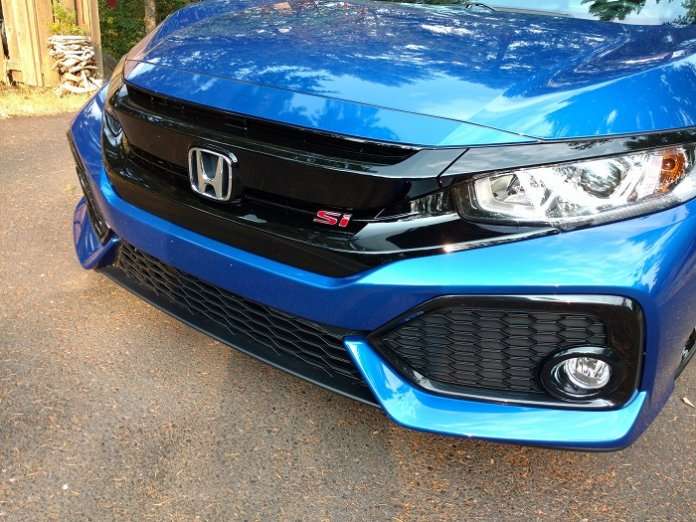 For many of us living in the Pacific Northwest, the Summer of 2017 has been a rather dry one. I took delivery of Honda’s 10th generation Civic Si on Tuesday, low and behold, the first rain of the season came across the hill Sunday morning; affording a great opportunity to drive Honda’s first turbocharged, limited slip differential, Civic Si in the rain.

Say what you will about the inherent advantage of all-wheel-drive enabled traction in wet weather. And certainly, Ford STi, Subaru WRX, and the no longer available in the U.S. Mitsubishi Lancer WRC, arguably have an advantage under extreme track and gravel road driving conditions.

However, Honda Civic Si, the long standing performance benchmark in low displacement, FWD (front-wheel-drive) performance coupe and sedans, comes to market for 2017, with not only the first factory turbocharged engine offered in Civic Si trim, but a much improved drive and ride dynamic.

The icing on the cake for Honda performance enthusiasts, is an exceptional limited slip differential, and arguably the best working close-throw 6-speed manual found in the compact performance segment to date; I can’t get enough seat time in 2017 Honda Civic Si. For Torque News, the 2017 Honda Civic Si adventure began at the Honda Mojave Desert Proving Grounds.

I realize that that’s a bold statement, and that the quad-drive-tuner crowd will chime in with a harsh rebuttal or two. Here’s my argument: $24,975 fully equipped! O.K., there’s a bit more to the 2017 Civic Si than MSRP, but that’s a great starting point. Honda brings simplicity to the Civic Si buying experience. The only option you’ll find for Civic Si, outside of the coupe, sedan variable, is summer tires. Remarkably: 2017 Honda Civic Si presents exceptional sport-performance, while maintaining the everyday driving attributes of Civic; the interior while “sport,” is non-compromised as to drive comfort, safety, and relative quiet. If I was to change anything, it would be to reduce the driver's seat hip bolstering a bit, and install power adjustment and seat heating, but that’s just me. And yes, for you audiophiles, this Civic Si is equipped with a remarkably good sounding premium audio system sporting 10 speakers and subwoofer, controlled from the smart wheel or 7 inch dash integrated touch screen monitor. What you won’t find standard or optional, is Honda Sensing, Si doesn’t offer it, let’s drive. More than once I glanced down to the dash display only to discover near 3 digit speed sprints -- 2017 Civic Si is more than enough “sport,” to gain several points on one’s driving record -- with the suspension, braking, and stability track standard equipped to keep the seasoned performance driver out of serious trouble. On the completion of my short fourth or fifth run of the day, I wanted more; Civic Si is that fun to drive. I recommend a 2017 Honda Civic Si test drive to anyone considering the purchase of a compact sport coupe or sedan.