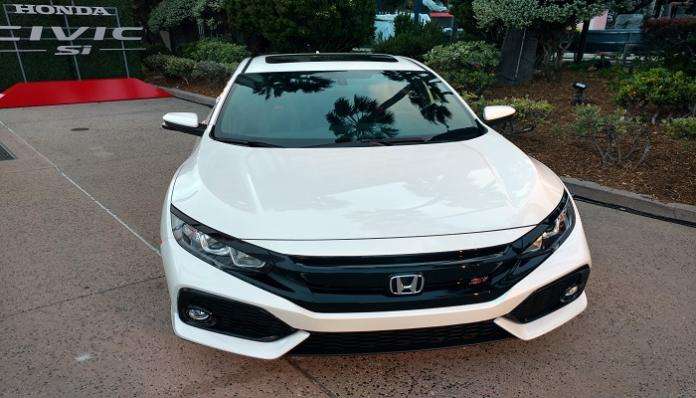 For Honda performance fans in the U.S., Civic Si has long been the holy grail of affordable front wheel delivered road handling performance and sport. Honda just turbocharged it!
Advertisement

2017 Honda Civic Si is the maker’s answer to affordable sport car class ownership, while preserving the historical near mechanical bulletproof aspect of all Civics, past and present -- with a twist, this Si is by far, the most drive and ride experience intense 10th generation Civic offering presented to date.

When looking top the MSRP, and total standard feature trim package presented through 2017 Civic Si, either in coupe or sedan form, no other brand available in North America, presents more car for the money.

Honda’s grand concept for Civic Si is not tough to grasp. If a car possessed spirit, Civic Si’s would be “soulful” as to performance, “charismatic” as to the redesigned body design, interior, tech and stunningly complete one-fits-all trim packaging, and “comfortable,” as to standard equipment and top of class passive and active safety features.

For 2017, Honda takes the time proven Civic Si formula to the next level, in spades! This is without question the pinnacle of Si performance, and can be had for well under $25,000, ready to compete with the best offerings in the compact performance car class. The seat? Butter! For those wanting more, Civic Type-R is right around the corner.

It’s that “multiple-task” car-capability thing that Honda does so well.

Alright guys, here’s the thing: Torque News has driven Si. And frankly, we’re just a tad humbled by the experience. However, we’re under driving impressions embargo until the end of the month. We can tell you that Si is the quickest, and by some measures, the most comfortable Honda in the current 10th generation lineup. One forgets they’re driving a 4-cylinder, front wheel drive, compact car, when sitting behind the wheel of 2017 Civic Si. It’s road masterful!! We’ll leave it at that until May 30.

Jose R. wrote on May 26, 2017 - 10:39am Permalink
Great tease guys! I can't wait to read a full review with performance numbers. I own a 2017 GTI Sport, but years ago I had an 8th gen SI and that car is one of my all time favorite cars I've owned. I am curios as to how it stacks up against the GTI since to me, the GTI is almost a perfect car.
Parks McCants wrote on May 27, 2017 - 1:23pm Permalink
Welcome Jose. Although under a drive impression embargo, I can tell you this: Civic Si's base MSRP is $1700 less than GTI, Si comes standard with adaptive dampers, moonroof, dual climate zone A.C., and an available smart entry and remote engine start -- GTI doesn't. On the performance side, we'll have to wait a week for that one. Take care.