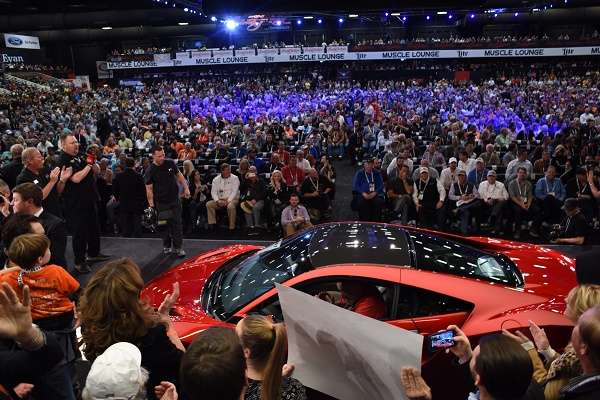 Rick Hendrick pays $1,200,000 for 2017 Acura NSX VIN #001 at Barrett Jackson Auto Auctions, Prescott, Arizona with all proceeds going to charity. What better way to launch the most exciting car in Acura history.
Advertisement

Rick Hendrick, owner of Hendrick Performance, NASCAR Team Hendrick Motorsports, and Hendrick Auto Group, just payed $1,200,000 for 2017 Acura NSX Vin # 001 -- we believe the most ever paid for an Acura. In-fact this is a record for Barrett-Jackson

According to our sources, the Friday evening bid action from the Barrett-Jackson Auction floor was fierce, and with an opening bid of $500,000 serious. Within minutes, bids for the 2017 Acura NSX hybrid supercar topped $1,000,000, with Mr. Hendrick taking #001 with a winning bid of $1.2 million, -- 10 times the suggested MSRP of the top trimmed variant. I had guessed that the bid wouldn't break $1,000,000. I was wrong.

For his generous charitable donation, Mr. Hendrick takes ownership of the first production 2017 Acura NSX supercar, while benefiting thousands of children in need.

Thoses viewing the stunning car collection that bears the name Hendrick Performance, spanning decades and including some of the most iconic historically correct race, show and concept Chevrolet Corvettes in the world, know that Rick Hendrick pulls some serious weight in the rarefied world of serious car collectors. He also has a 30 year business relationship with Honda, Acura.

What you may not know is that Mr.and Mrs Hendrick founded “Be The Match” foundation, an organization dedicated to matching compatible Bone Marrow donors with those individuals suffering from Leukemia. Hendrick lives to give!

On the auto business side of the equation, Mr. Hendrick began his auto racing and subsequent car sales business as a teenager, spinning his auto racing passion into car sales. Today he serves as Chairman to a multiple state auto dealership network, and NASCAR race team, as well as a charitable foundation or two.

Setting his NASCAR endeavors aside, Hendrick holds the record for youngest (ever) Chevrolet Dealer in the U.S.,(age 23) and despite shifts in the economy over a 45 year career in the auto industry and racing, including the economic implosion of G.M., has grown the 6th largest dealership groups in the United States, with 90 + locations, 10,000 employees, and sales in 13 states.

According to our friends at Acura Division, all proceeds from the sale will go to “The Pediatric Brain Tumor Foundation” and “Camp Southern Ground.” to the benefit of children and their families in need.

Next up for Acura NSX is Super Bowl Sunday. See you there!